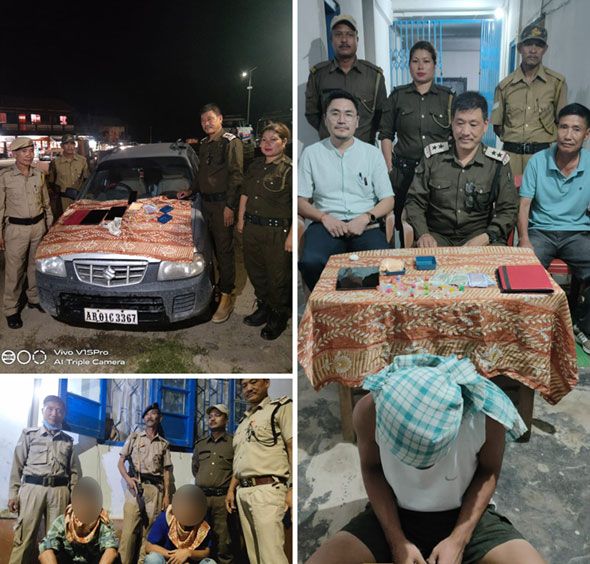 Lower Subansiri DSP Tasi Darang informed that, on 7 August, following the instruction of SP Sachin Kumar Singhal, a naka was placed in Yazali to check illegal movement of drugs.

to stop by Constable Joram Kamal of the naka party. The driver stopped the car near the naka team. In the car, one lady (minor) and one male were present. The naka party asked the driver to show the contents of a bag on the backseat of the car.

“The driver, Takam Jumnya (24), of Sangyata village in Kra Daadi district, opened his bag, in which suspected heroin and some empty vials were found,” the DSP stated in a release.

The police team opened the bag in the presence of Magistrate Tashi Wangchu Thongdok, and seized suspected heroin weighing 14.73 gms, along with 28 empty vials.

“The car, three mobile phones, one Samsung notepad, and one iPaD were also seized in the presence of the magistrate,” Darang said.

The driver divulged that the heroin packet had been given to him by some unknown person in Assam, bearing the mobile number 8099954360, to deliver it to one Naba Kadu and one Kulong Tamut, who were both working in the Palin police department.

The driver, along with the two police staffers, was arrested.

“The accused failed to tell the name of the car owner, who was his uncle, but from the RC of the car, the owner’s name has been identified as Kamal Baruah, a resident of Chimpu in Papum Pare district,” said the DSP, adding that Baruah is yet to be arrested.

The suspects have been detained at the Yazali police station for further interrogation, a case [u/s 22 (b)/27 NDPS Act r/w 120 B/34 IPC] has been registered against them, and further investigation is underway, the DSP said.