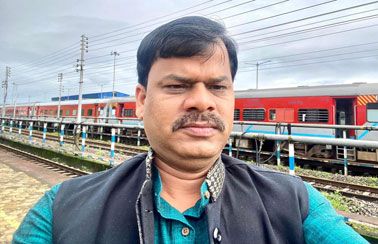 Besides Mishra, one Tendy Lamo has also been asked to appear before the police here on the same day.

The SCYA has alleged that Mishra, along with a few others, visited the disputed Eko Dumbing/Riwotala area and constructed a structure, “thereby breaching the order of district administration not to carry out any activities in the area without permission of the administration.”

The FIR also mentioned the names of Michung Khamba, Tendy Lamo and Laida Wangchuk, besides that of Mishra, alleging “violation of peace and tranquillity by hurting religious sentiments of the local Adi community.”

communities, at the initiative of the state government, to maintain peace by refraining from carrying out any kind of activity in the disputed Eko Dumbing/Riwotala area.

Meanwhile, the police have arrested Chime Yangsang Pemakod Welfare Society president Michung Khampa, who is alleged to have invited Mishra and arranged the whole trekking expedition to the Eko Dumbing/Riwotala area.

The locals here have welcomed the arrest of the main accused but questioned the delay in arresting Mishra.

“He is the BJP’s state general secretary (organisation) and a very responsible and senior leader of the party. He visited the area despite knowing the fact that the area is disputed, and that the district administration has banned all kinds of activities. His visit will be used by the Memba-Khamba Buddhist organisation to legitimise their claim. Mishra has provoked the sentiments of indigenous Adi community. He needs to be held responsible for it,” said a local resident who did not wish to be named.

The locals also alleged that the state BJP is protecting Mishra, due to which the Yingkiong police have not arrested him till now.

Eko Dumbing, also known as Riwotala, is a three-day trek away from here. The area is considered to be a sacred place for both the Memba-Khamba Buddhist communities and the Adi community of Upper Siang. There is a running dispute between the tribes, and the administration has banned any kind of activities in the area due to constant religious disputes.

In October last year, Buddhist religious structures constructed at the site were burnt down by miscreants. The local Buddhist communities lodged an FIR and the police arrested five people. After intervention by the chief minister’s office, members of both communities agreed to maintain communal harmony and peaceful coexistence. A peace committee set up under MP Tapir Gao is working on a solution acceptable to both communities.