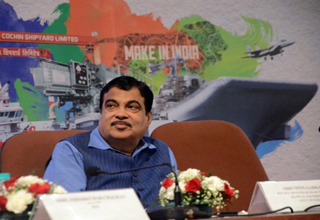 NEW DELHI, Sep 10: Days after assuming charge of the water resources ministry, Nitin Gadkari has asked officials to find ways to mitigate flood situation in parts of the country, and look for cost-effective ways for implementation of water conservation and irrigation projects.
Gadkari, who replaced Uma Bharti in the water resources, river development and Ganga rejuvenation ministry in the recent Cabinet reshuffle, has also asked bureaucrats to frame a policy on using recycled water, official sources said.
“In one of the meetings, he expressed concerns over the damage caused to lives and properties by flooding in the country every year. He has suggested taking cost-effective measures to combat inundations by using available resources like dredged material/sand to begin with,” a source said.
Among the suggestions he made was the construction of protection walls in perennially flooded areas to prevent damage to properties and lives.
On flooding in Assam caused by the Brahmaputra river, the minister was told that the issue could not be resolved until a major dam, like the proposed Middle Siang, was constructed, the sources said.
“This is mainly because the volume of the rivers discharge is so huge that only a big dam can solve the issue,” the source said.
The Centre has been pursuing the Assam and Arunachal Pradesh governments for their nod for construction of the project, which will produce 9,600 megawatts of power and help control floods caused by the Brahmaputra.
Flooding in Assam has claimed 158 lives so far this year, while 482 people have died in Bihar till August-end.
In Uttar Pradesh, 108 people had died as on September 1.
The flooding hit over 1.5 crore people in Bihar, UP and Assam last month and caused massive damage to wildlife and property.
Gadkari, who also hold the road transport and shipping portfolio, has asked officials to study innovative, low-cost ways for water conservation and irrigation.
The minister has also suggested involving institutions such as Indian Institutes of Technology (IITs) for developing cost-effective techniques to conserve water and control flood. (PTI)