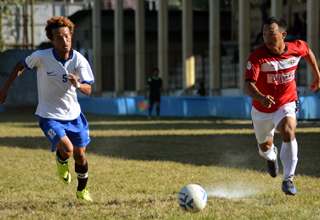 ITANAGAR, Nov 19: Gora Makik SC set up a mouth watering final clash against Todo United after a 2-0 (4-0 in aggregate) victory over Capital Complex FC in the second leg semi final of the T K Arunachal Super League.
Gora Makik SC was holding a 2-0 advantage from the first leg semi final.
Byabyang Doley (5th Min) and Charu Lalum (43rd min) scored for the winning team.
Capital Complex launched couple of good moves in the second half but failed to convert the opportunities.
The final match is scheduled to be played on November 25 at Rajiv Gandhi Stadium, Naharlagun. The match will start at 1:30 pm.