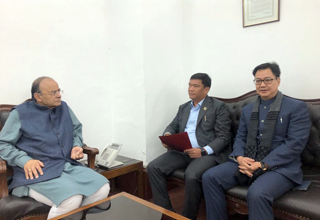 NEW DELHI, Jan 4: Arunachal Pradesh Chief Minister Pema Khandu called on Union Finance Minister Arun Jaitley here on Thursday and sought his support for early commencement of the construction work for the civil airport at Hollongi.
Accompanied by Union Minister of State for Home Affairs, Kiren Rijiju, Pema called on Jaitley as a follow-up to his meeting with Prime Minister Narendra Modi last December.
He also sought the union minister’s support for the construction of the Frontier Railway (which is under active consideration of the home affairs ministry), the East-West Industrial Corridor in the state’s foothills, a water supply plan, and enhancement of SDRF and NDRF grants to the state with special relaxation.
Pema requested the finance minister to release a one-time grant of Rs 1060 crore for several crucial unfinished centrally-sponsored schemes which have now been de-linked, such as the SPA, the product infrastructure development for destinations and circuits, the JNNURM, etc.
The CM also appealed for establishment of a cantonment in Itanagar, as had been assured by the defence minister during her last visit to the state capital.
Informing that a comprehensive package is being prepared for addressing the critical infrastructure gaps, the CM sought resources for creating new infrastructure for the administrative centres by replacing the old and outlived infrastructures surviving from the NEFA days.
“We are grateful that the smart city project for Pasighat has been approved and Itanagar also has been short-listed under the scheme,” the CM said, adding, however, that “we need to revisit the modalities of implementation and have a 90:10 sharing between the Centre and the states as is the case for other centrally-sponsored schemes.”
Apprising the union minister of the mismatch in the FFC recommendation and the actual release, Pema said this is a major cause of concern for a resource-constrained state like Arunachal Pradesh. He appealed for the release of fund as per the recommendation of the 14th Finance Commission at the earliest.
Jaitley on his part assured all possible support to Arunachal Pradesh.
Later, on Jaitley’s advice, Pema met expenditure secretary, Ajay Narayan Jha, and discussed matters relating to the state’s finances. (CMO)