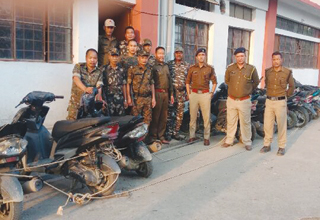 Staff Reporter
ITANAGAR, Mar 26: Police have apprehended two juveniles involved in the theft of two-wheelers, and recovered 10 scooters and one motorbike from their possession.
The recovered two-wheelers include a Yamaha FZ and mostly Yamaha RayZ scooters.
Itanagar SDPO Kamdam Sikom informed that the two bike lifters are minor school children.
“It has been observed that dishonest receivers of stolen two-wheelers are directly or indirectly encouraging young minor boys to steal, and we are taking strict action as per law against them,” said the SDPO.
He also warned buyers or receivers of stolen motorcycles to either surrender the motorcycles and scooters before the police or face consequences.
The capital SP has informed that motor vehicle theft prevention as well as detection strategies have been strengthened.
He informed that police teams are being raised to target auto lifters and put them behind bars. Awareness campaigns are also being organised to sensitize the people to use anti-theft equipment.
The police team was led by the Itanagar SDPO, Itanagar police station OC Inspector T Bage, and SI L Kamcham, all working under close supervision of SP Kalsi.