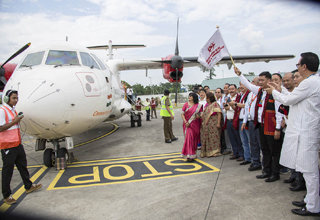 PASIGHAT, May 21: Arunachal Pradesh made it to the commercial aviation map of the country with the landing of a fixed-wing Alliance Airline flight.
It was flagged-off by Chief Minister Pema Khandu here on Monday, paving way for air connectivity of the proper order for the people of the state.
Pema and his legislative colleagues were among the first passengers on the historic flight.
“Today is a historic day and I congratulate the people of Arunachal in general and the people of Pasighat in particular for this new milestone that would remain engraved in history as a huge step in the development of our state,” said Pema said after landing at Pasighat airport.
On persuasion of the state government after Pema came to hold the mantle, Air India Ltd agreed to start ATR-42 services of Alliance Air to Pasighat from the Gopinath Bordoloi airport in Guwahati, connecting the state with the rest of the country.
The flight operation is initially fixed along the Kolkata-Guwahati-Pasighat route, and the service will be made available thrice a week on alternate days – Tuesday, Thursday, and Saturday.
In the second round of bidding (RCS UDAN-2), eight locations in Arunachal Pradesh were selected by bidders, out of which Pasighat and Tezu were selected for fixed-wing flight services while Ziro, Daporijo, Itanagar, Tuting, Wallong, and Yingkiong have been selected for helicopter services.
Air connectivity by fixed wing and rotary wing services at the aforesaid locations will start after necessary formalities and fulfillment of some statutory requirements.
“Next in the line is Tezu,” Pema informed.
He said that with air connectivity, the economy of the state would take a boost and the major gainer would be the foothill areas, “where productivity is better than the rest of the state with inaccessible mountains.”
Pema expressed hope that in the near future cargo services would also be introduced. That would immensely help the farmers of the foothills in marketing their produces, he said.
Hailing the residents of Pasighat for donating land free of cost for the airport, he appealed to them to “dream big and show the same zest in making land available for a Boeing aircraft to land in Pasighat.”
Besides Alliance Air, which is a subsidiary of Air India, Zoom Air and Turbo Jet are set to commence their services in the state soon, as formalities are being chalked up at the moment.
The state government is also in the process of hiring a small 8- to 10-seater fixed-wing aircraft under the Chief Minister’s Air Connectivity Scheme to connect some other locations, including Mechuka.
Arunachal Pradesh had air-transport facility right from the pre-Independence period, and many helipads and advanced landing grounds (ALGs)/airstrips were built for defence as well as civil purposes. There are about 120 helipads and 10 ALGs (Ziro, Pasighat, Aalo, Tuting, Mechuka, Vijaynagar, Walong, Tezu, Daporijo, and Alinye) in the state.
In the ’80s, small fixed-wing aircraft, called Vayudoot, operated in some the airstrips like Ziro, Aalo, Pasighat, Tezu, etc, for civil passenger services.
“Passenger flight services from Pasighat would ease travelling to Guwahati and other Indian cities in cases of emergency. The air connectivity would also fuel rapid progress of Pasighat town as a smart city in the days to come,” said Mohonto Pangging of Pasighat, a retired group captain of the India Air Force.
Pasighat East MLA Kaling Moyong, who was actively involved with the preparatory work, expressed optimism that the flight service from Pasighat would cover the rest of Arunachal besides parts of Dhemaji and Lakhimpur areas in neighbouring Assam.
West-Arunachal MP and Union MoS for Home Affairs Kiren Rijiju also took to the social media and informed that the state cabinet is soon going to send proposals for operationalizing the remaining four ALGs (Ziro, Mechukha, Tuting, and Aalo) to New Delhi for approval.
Earlier in the morning, Pema along with Deputy Chief Minister Chowna Mein, Legislative Assembly Speaker TN Thongdok and other cabinet ministers and legislators became the first passengers on the maiden flight from Guwahati airport after a brief ceremony. They landed at Pasighat two hours twenty minutes after taking off from Guwahati at 12.44 noon.
The flagging-off ceremony was also attended by ministers and legislators, Civil Aviation Joint Secretary (GoI) Usha Padhee, Civil Aviation Deputy Director General (GoI) Lalit Gupta, and officials and representatives from the Indian Air Force, Air India, and the state government. (With inputs from Prafulla Kaman and CMO)