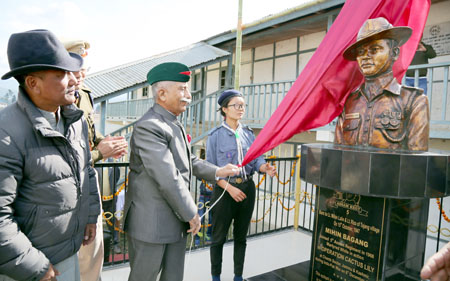 HAPOLI, Dec 6: Governor BD Mishra unveiled the bust of martyr sepoy Mihin Bagang, of the 5th battalion of the Assam Regiment, here in Lower Subansiri district on 6 December.
Sepoy Bagang made the supreme sacrifice in the defence of the nation on 6 December, 1971.
The bust is located in the compound of the government secondary school here, which has by a state gazette notification been rechristened Mihin Bagang Government Secondary School.
The occasion coincided with the third raising day celebration of the Apatani Youth Association to commemorate the 47th death anniversary of martyr Bagang.
Speaking on the occasion, the governor said India defeated Pakistan in the 1971 war “on the strength of patriotism and the ‘nation first’ spirit of the people like sepoy Mihin Bagang.”
Paying rich tribute to the martyr, Mishra said Bagang’s mission to serve India and his supreme sacrifice in the line of duty have made him immortal, and called upon the people to remember and cherish the valour of sepoy Bagang.
“Our tribute to this brave son of this beautiful valley will be to encourage our youth to follow his path and join the army, the air force and the navy in various capacities,” the governor said.
He urged the district administration, the political leadership and the goan burahs to motivate the youths to serve the nation through careers which the Indian armed forces provide.
Mishra also recalled with appreciation the recently conducted ‘Pay Back to Society’ programme by 27 armed forces officers from Arunachal Pradesh, which included 20 from the army, four from the navy, and three from the air force.
Addressing the ex-servicemen present on the occasion, the governor exhorted them to serve the society. He also urged the political leaders to explore avenues where the ex-servicemen could be placed to contribute to the public wellbeing.
The governor said that youth, education and cleanliness are a must for the progress of a society.
“I dream to see an Arunachalee IAS/IPS officer in each of the 29 states and three union territories of the country,” he said, and informed that he has already initiated the matter of establishing seven additional Kendriya Vidyalayas in Arunachal Pradesh.
MLA Tage Taki, AYA president Habung Tamang and Capital Complex Tajang Welfare Association secretary Radhe Millo also spoke.
Mihin Tallang Tangu presented a brief narrative on the life of sepoy Bagang.
The governor’s wife, Neelam Misra, Lower Subansiri DC Chukhu Taker, SP Mihin Gambo, goan burahs and others also attended the programme.
A colourful cultural programme dedicated to sepoy Bagang was presented by women of the Apatani community and school children on the occasion. (Raj Bhavan)