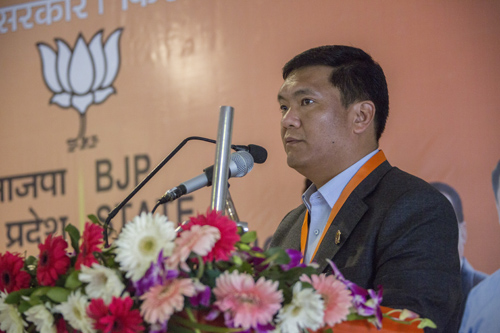 Staff Reporter
ITANAGAR, Mar 5: The government of Arunachal Pradesh has issued a gazette notification informing that no further action will be taken in the matter pertaining to granting of permanent resident certificates (PRC) to the non-APST residents of Namsai and Changlang districts.
Based on the decision taken during the cabinet meeting held on 25 February, the notification read: “In the public interest, the governor of Arunachal Pradesh is pleased to order that no further action shall be taken in respect of the said issue and the same is closed.”
Meanwhile, Chief Minister Pema Khandu has announced a judicial probe into the large-scale rioting, violence and vandalism that took place during the recent anti-PRC protests, which resulted in the death of three youths, injuries to several people, and huge losses of public and private properties.
Speaking during the state BJP council meeting in Jullang on Tuesday, the chief minister said justice would be served to the bereaved families, “and the people responsible for causing violence in the state capital will be brought before the law.”
He said the probe will be conducted by a committee headed by a retired judge to ensure thorough and impartial inquiry, “so that the real picture of the anti-PRC protest could be unearthed and appropriate actions taken against people behind the violence.”
On the refusal of the families to accept the ex gratia announced by the government, Khandu said he understood the losses faced by the families, and assured to meet the families as soon as the situation settles down.
Clarifying that the state government had never intended to move a resolution or a bill in the assembly regarding issuing PRCs, the CM said the matter was to be brought in the assembly “only for discussion during the short-hour discussion” and to make the recommendations of the joint high power committee (JHPC) on PRC public.
“After the JHPC recommendations had been made public, the state government had planned to call wider public consultations, involving all stakeholders, including CBOs, student organizations and other bodies,” Khandu said.
“However, the issue was misinterpreted, causing unrest among the students,” he said.
The chief minister highlighted that despite assurances, large-scale rioting and vandalism of government and public properties took place, which he said meant that “the antisocial elements had taken control over the protest with political motive.”
He also informed that the matter of issuing PRCs to non-APST communities of Namsai and Changlang districts has been forever scrapped, and that a gazette notification in this regard has been published.
On whether there was dissidence in the BJP as Home Minister Kumar Waii had said he was unaware of the requisition of extra forces and that he did give orders for firing, Khandu told reporters that there was absolutely no dissidence in the party, especially since the elections are close by.
He clarified that neither the home minister nor the chief minister or any other minister or MLA has the right to issue firing orders. (With CMO inputs)