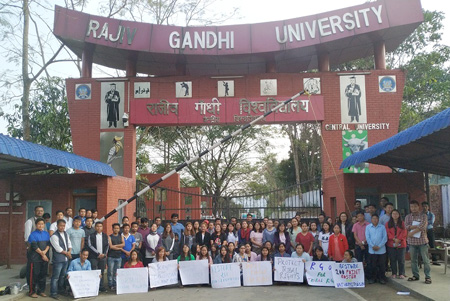 RONO HILLS, Mar 5: Supporting the Bharat bandh called on Tuesday by several tribal outfits across the country to protest the displacement of 10 lakh tribals from their lands and the University Grants Commission’s (UGC) new 13-point roster system that will cut jobs for Scheduled Castes, Scheduled Tribes and the OBCs, Rajiv Gandhi University’s Students’ Union (RGUSU), Research Scholars’ Forum (RGURSF) and Teachers’ Association (RGUTA) observed a total campus shutdown from dawn to dusk on Tuesday.
The teachers and students demanded that the central government promulgate two ordinances to secure the tribal rights that have been affected by the Supreme Court decisions: one to secure the forest rights of the tribals, and the second to ensure fair representation in UGC faculty posts.
The call for the nationwide strike came after a recent SC decision to carry out eviction of tribal and forest dwellers, whose claims over forest land were declined under the Scheduled Tribes and Other Traditional Forest Dwellers (Recognition of Forest Rights) Act, 2006.
RGUTA president Prof Jumyir Basar termed the SC’s decisions a form of marginalization on the already marginalized community.
“We are being deprived of our rights, good governance and justice because the centre doesn’t care to pay attention to the voice of the minority 8% community that constitutes India’s population,” Prof Basar said.
Speaking on the 13-point roster system, she said the new system replaces the 200-point roster system, in which the entire university was taken as a unit for reservation and recruitment. Under the new 13-point roster system, each department is taken as a unit for implementing recruitment and reservation policy for teachers.
“Given the 13-point roster system, our coming generations won’t be able to teach in universities and will be deprived of equal competition,” she said.
MSW Assistant Professor John Gangmei said the recent judgment has made the tribal people dwelling in forests encroachers on their own land.
“India’s thin tribal population is facing annihilation,” he said. “The Centre is mooting to eliminate all the tribal indigenous people.”
“We are asking for our rights, which we deserve in line with the principle of affirmative action prescribed in the constitution. The SC is hell bent on scrapping reservation for the marginalized communities,” Dr Suman Prakash Prasad of the university’s education department said.
RGURSF chairman Margum Ado termed the 13-point roster “draconian” and called for its removal.
RGUSU president Goda Karu said “there is no point in studying further if our rights are curtailed,” while RGUSU GS Barik Riba advised the students to “be proactive not only in studies but in fighting for their rights as well.”
RGU Assistant Registrar Gomar Basar also spoke.
Today’s bandh was also supported by several groups and political parties across the nation opposing the SC’s recent dismissal of a review petition on the 13-point roster. They claim that the apex court’s order will adversely affect the chances of SC, ST, and OBC candidates to take up faculty posts in universities.