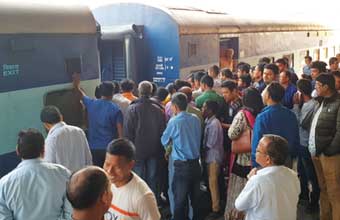 Staff Reporter
NAHARLAGUN, Mar 26: Smoke was detected emanating from an AC coach of the Naharlagun-bound Donyi Polo Express intercity passenger train in the wee hours of Tuesday, forcing the train to halt at the Gohpur station for hours.
The train was coming from Guwahati. Reportedly, no passenger was harmed as everyone was evacuated safely.
Gohpur railway station master Vivek Ranjan informed that railway staff detected smoke emanating from the three-tier AC coach, B-3. The train was then halted at the Gohpur railway station for a few hours to address the problem.
The passengers meanwhile complained over the long delay, and said the railway officials could not detect the cause of the smoke.