Following the traditional myths and legends, the Tagins, the Apatanis, the Nyishis, the Galos and the Adis of Arunachal Pradesh, and the Mishings of Assam claim themselves to be the descendents of Tani, or Abo Tani, or Abu Tani, who was the first ever human being on the surface of the Earth.

Emerging on the surface of the planet and seeing the light of the sun and the moon for the first time, he became excited and raised sounds of amazement. In the course of time, his utterances developed into a spoken dialect, called  Tāni Āgom or human language.

Abo Tani accommodated himself in Sedi Litung Borbung or the Great Grand Cave after becoming the first human being on the surface of the Earth. In course of time, he had a number of children. The number of his descendents increased and the Great Grand Cave could hardly accommodate the increasing population. The situation compelled them to migrate out of the cave. In different times, they migrated out of the cave in batches, called the Tagins, the Nyishis (Nishings), the Apatanis, the Toopos (Galo), the Adis (highlanders/paharis) and the Mishings (Miris). While migrating, they followed the course of the Siang, the Sinyik (Subansiri/Obonori), the Siyom, the Kameng etc, rivers, and settled in their present locations.

The Adis landed in the Brahmaputra valley of Assam, and settled down there. Constantly migrating and settling in different regions, separated by high mountains and turbulent rivers, the groups of Tani’s descendents almost lost contact with each other for centuries. This resulted in dialectical variations among the Tani tribes. And yet, these dialects are fundamentally the offshoot of Tani Agom. If no effort is made to adopt a viable script to give it a written form, Tani Agom will be buried in oblivion. Along with it, the traditions, cultures, histories, customs and identities of the tribes will die a natural death. Keeping this is mind, vitalization of Tani Agom by adopting a suitable script becomes a serious concern.

A brief history of adoption of scripts

Prior to the attainment of Indian independence in 1947, the tribes of the North East Frontier Agency (present Arunachal Pradesh) were almost illiterate. Fortunately, after the Yandavoo treaty in 1826, the entire Assam, upto the foothills of Arunachal Pradesh, came under the British colonial rule. An administrative centre was established in Sadiya.

Along with the spread of administration, Christian missionaries also moved up and established a primary school in Sadiya, where children of the tribes were admitted. To spread the message of Christianity, the missionaries published some religious hymns by adopting the Roman script in Adi or Tani dialect. The missionaries encouraged the tribal children to sing in the Caucasian tune.

Seeing the adaptability and enthusiasm of the children, they also published some school textbooks in the Adi dialect. But at the end of the Second World War in 1945, the venture of the missionaries ended abruptly. Probably this happened due to change of governance.

In 1955, I went to Shillong for higher education. There, I had the opportunity of meeting Indira Miri (the then education officer), Jairam Das Daulatram (the then governor of Assam), Dr Verrier Elwin (advisor on tribal affairs), and many other senior ranking officers of the NEFA administration.

They were agog at the production of textbooks for primary schools in the tribal dialects of the NEFA. They advised me to translate some lessons for primary education in the Adi (Tani) dialect. The lessons were written in the English language.

I was in a dilemma which script I should adopt in translating. However, I attempted to translate using the Assamese, Sanskrit and Roman (English) scripts. I found Assamese and Sanskrit scripts cumbersome and slower in writing. The Roman (English) script was easier and simpler in writing. The Text Book Production Branch (TBPB) office remained indecisive. So, on my decision, I started to translate books in the Roman script.

The office of the TBPB compiled the translated versions for publication, and the NEFA administration communicated with the central government for approval. Jawaharlal Nehru, the then prime minister of India, pronounced a policy statement saying that “Devnagri Nayee Talim” script be adopted for tribal dialects for the North East Frontier Agency.

His pronouncement poured cold water on the enthusiasm of the NEFA administration. All our hard efforts were thrown into the wastebasket and burned down.

Devnagri Nayee Talim script? Everybody paused. At that time, officials of the NEFA administration had not much of an idea about the ‘Nayee Talim’ script. Fortunately, I had been to Mahatma Gandhi’s Sewa Gram at Wardha in 1951-52 and was acquainted with the ABCs of the Nayee Talim script. It was a modified form of the Sanskrit script.

With my scanty knowledge, I attempted to translate using the Nayee Talim script. Das Shastri (philologist) and Laksha Kumar (educationist) guided me in putting some diacritical marks on Nayee Talim to denote the peculiar sounds of the Adi tongue. Things looked complex and cumbersome. However, books were translated, published and distributed to Adi speaking schools.

The introduction of books with the Devnagri Nayee Talim script touched the hornet’s nest. Students complained against the introduction of an additional script, because it impeded their progress in learning. The village elders also supported the students. I remained a silent spectator to the situation.

This was brought to the knowledge of the prime minister. He pronounced again, saying “Let the tribes grow on the lines of their own genius. Overfeeding of more developmental schemes may cause indigestion.”

His observation on the situation posed a serious situation for the administration. In such a situation, I could hardly proceed further in translating books. Since then, the TBPB office remained unproductive. Till today, I have not heard of adopting a viable script for the Adi/Tani dialect. Things remain a wishful thinking.

The answer was left to the succeeding generations of the tribes.

As an answer to the question, the Adi and the Mishing student unions have set up literary societies and have made attempts to adopt the Roman script for their dialects. Somewhere I have seen some booklets published in the Adi and Mishing dialects, using Roman letters. But there are some shortfalls in the endeavour to adopt the script. Mere adoption of the Roman script results in Caucasian or European pronunciation. Therefore, adoption of script should be done to allow undisruptive flow of the Tani/Adi tongue; otherwise, it may become unrealistic. Because of such shortfall, the Christian missionaries could not achieve further development in their attempt to adopt the script for the Adi dialect.

There are certain phonetical sounds of the Adi/Tani tongue which are not in conformity with the Caucasian or Roman tongue. So, while adopting the script, some marks are required to be added on some letters in such a way that the Roman letters are not distorted. This is to be done to accommodate the typical sounds of the Tani tongue. Without such adjustment, no readable and correct literature can be written in the Adi dialect.

I am not a student of philology and phonetical studies of human languages. I simply approach the issue with practical experiences. The following formula of adoption of the script is put forth.

The entire Roman letters, from A to Z, to are to be adopted. Some critical marks are added on some letters to accommodate. 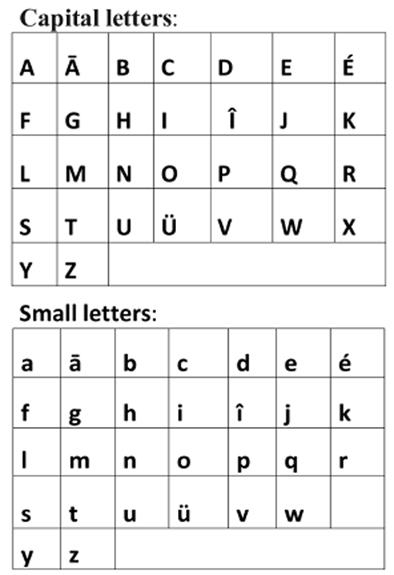 Four critical marks (  ̄), (î), (ˊ) and (  ̈) have been added on the Roman letters A, E, I and U to denote the typical sound of the Tani tongue, which are akin to the Tibeto-Mongoloid phonetics .With this addition of letters, the total alphabet of the Tani/Adi dialect goes up to 30 letters. 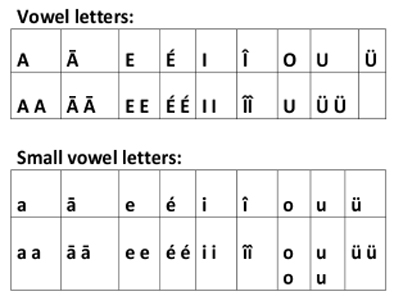 The Adi Agom or dialect has 18 vowels. Each vowel has two sounds – short and long. To indicate the short and long sounds, we have put two vowel letters together with some critical marks. Word pronounced with short or long vowels carry different meanings. For example:

I have already stated that four letters with critical marks have been added to the 26 letters of the Roman script to accommodate the Tibeto-Mongoloid tongue of the Adi/Tani dialects. They are: Ā (ā), E (é), Î (îî) and ÎÎ (îî). These modified letters do not distort or coerce the fundamental structure of the Roman letters. The adding of the critical marks on the Roman letters is done in consultation with the phonetic sound of the Adi tongue. Caucasian and Aryan tongues find them a little difficult to pronounce correctly. Here, some amount of philological and phonetic feeding is required in adopting the script.

Firstly, we have put a dash mark on the Roman letter Ā (ā), indicating the direction of the movement of the Adi/Tani tongue. Here, the tip of the Adi/Tani tongue moves forward, runs parallel to the Earth, and produces a typical Asiatic sound. If no identical mark is added, readers will be misguided to pronounce it incorrectly.

Secondly, on the Roman letter É (é), a dash mark runs above the ground in a slanting direction to indicate the peculiar sound of the Adi tongue. Caucasian and Aryan speaking people find it difficult to pronounce it correctly.

Thirdly, on the Roman letter ‘I’, we have put an arrow mark Î (î) which runs vertically up to indicate the peculiarity of the Tani tongue.

Lastly, on the Roman letter U, we have put two dots, Ü, to indicate the peculiar sound of the Adi/Tani tongue.

It is my practical experience that, without adding critical marks to the abovementioned four letters, it is difficult to produce correct literature in the Adi and Mishing dialects. In this connection, I have seen somewhere that the Adi and the Mishing literary societies have made an attempt to adopt the colon (:) to indicate the long-sounded vowels of the Adi-Mishing tongue. But to my observation, the colon (;) is neither a letter nor a vowel in the Adi-Mishing tongue. A long-sounded vowel is distinct in itself in the Adi/Tani phonetics. Not only this, the use of the colon (;) impedes the uniform flow of letter writing. Therefore, it requires further discussion to arrive at a consensus.

I am convinced that the addition of four more vowel letters with critical marks to accommodate the Tibeto- Mongoloid tongue (as suggested above) is feasible in adopting the Adi/Tani script. Without it, no viable Adi/Tani script can be adopted. The Mishings migrated down to the Brahmaputra valley of Assam centuries ago. Living in Assam, they have been assimilated into the Assamese society: and yet, till today, the Mishings and the Adis speak in the same tongue and dialect.

This being so, the Adis and the Mishings can sit together, discuss together and put their heads together to finalize the adoption of the script. The Tagins, the Nyishis, the Apatanis and the Galos, who are also descendants of Abo/Abu Tani, may also produce literature by adopting the same script. The adoption of a common script may facilitate linguistic development of the tribes.(The contributor is a former administrator).