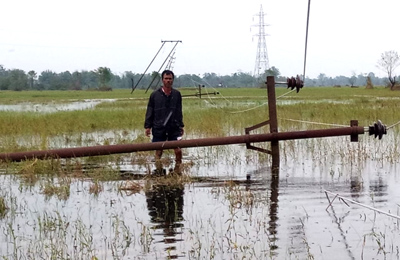 NAMSAI, May 15: Severe cyclonic storm has hit Namsai district damaging several houses, granaries, sheds, Govt. buildings, electricity lines in Namsai, Lekang and Piyong circles on Sunday.
15 homes were destroyed in Piyong circle. The families who were rendered homeless were immediately evacuated and shifted to a relief camp.
They were provided with rice, vegetables, lamps, and blankets by the district administration and the department of disaster management.
Deputy Commissioner Dr Tapasya Raghav along with officers visited the affected areas and interacted with the families on Wednesday.
The Health Department headed by DMO Namsai visited the relief camp and conducted health check up and also conducted health awareness in the camp. They also distributed mosquito nets in the relief camp.
Earlier on May 13, Deputy Commissioner Namsai directed all the administrative officers and Head of departments to tour respective areas to assess the damages in the district.
The next day, DC reviewed the damaged assessment report prepared by the administrative officers for further action.