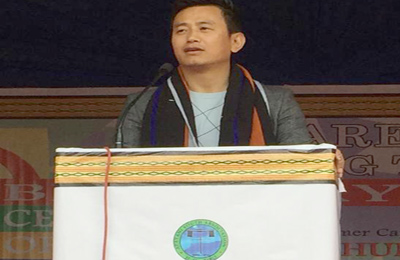 ZIRO, May 18: The Apatani Youth Association (AYA) Awards-2019 were given away on the occasion of the association’s 45th foundation day celebration here in Lower Subansiri district on Saturday.
This year, the AYA awards were conferred on five personalities/achievers in different fields for bringing glory to the Apatani society and the state.
While marathon racer Mudang Omo and promising footballer Tailyang Cosy were conferred with awards for their achievements in the field of sports, Punyo Chada was awarded for discovering the ‘Apatani Glory’ moth.
Film director, actor and singer Subu Gambo, who won the best actor and best playback singer awards for his film Oha…e during the recently held Arunachal Film Festival in Itanagar, and administrator Talo Potom were the other recipients of the awards.
Potom was awarded for the “bold steps he took for beautification of the capital complex.”
Former Indian football team captain Bhaichung Bhutia, who gave away the awards, said he would extend all possible help and support to talented youths of Ziro valley, be it in sports or other fields.
The renowned footballer also agreed to give talented players below 16 years of age a “chance” in one of his football schools, and those above 16 years of age in his Sikkim United Football Club.