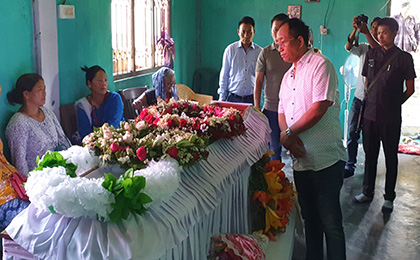 BALIJAN, Jun 12: MLAs Tana Hali Tara and Techi Kaso on Wednesday joined mourners in paying tribute to social worker Teli Hade, who passed away on Tuesday morning at his residence in Lower Balijan.
Speaking to reporters, Hali Said that late Hade was a soft hearted person and was known for his simple living and high thinking.
“He played an important role in moulding the society towards the right direction and also had vast knowledge of customary laws,” Hali said.
Kaso, while remembering late Hade, particularly lauded his role in maintaining peace along the Assam-Arunachal boundary in Balijan area.
Late Hade was 69 years and was currently serving as a political interpreter of the Balijan Administrative circle in Papum Pare district.
As per family sources, his last rite will be performed at his residence on Thursday.