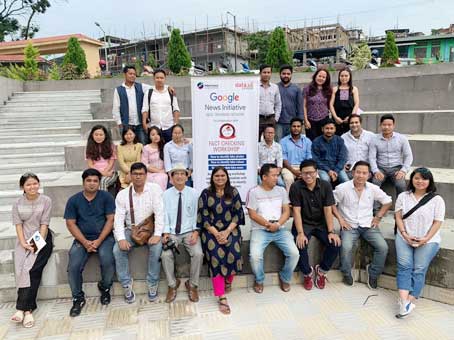 Staff Reporter
ITANAGAR, Jun 29: The Google News Initiative (GNI) in collaboration with the Arunachal Press Club organised a fact-checking workshop for the working journalists of the state at the Dorjee Khandu Convention Centre here on Saturday.
Scores of working journalists from Itanagar attended the programme, which was conducted by Delhi-based GNI teaching fellow Geetika Rustagi, who was supported by Nellie Manpoong of The Arunachal Times, who had participated in the GNI’s training of trainers programme in Kolkata last year.
Manpoong spoke on the types of misinformation and disinformation, and on how to verify photographs and videos and conduct social audit to confirm the identity of users. The workshop dwelt largely on identifying fake photographs and fake videos, and checking fake news, with the objective of building a stronger future for journalism.
The GNI has launched a pan-India training series for journalists on online verification and fact-checking, besides other courses, in 30 cities in 10 languages.
Since 2016, Google has trained more than 13,000 journalists in India, across 200+ newsrooms and in 40 cities, it said.