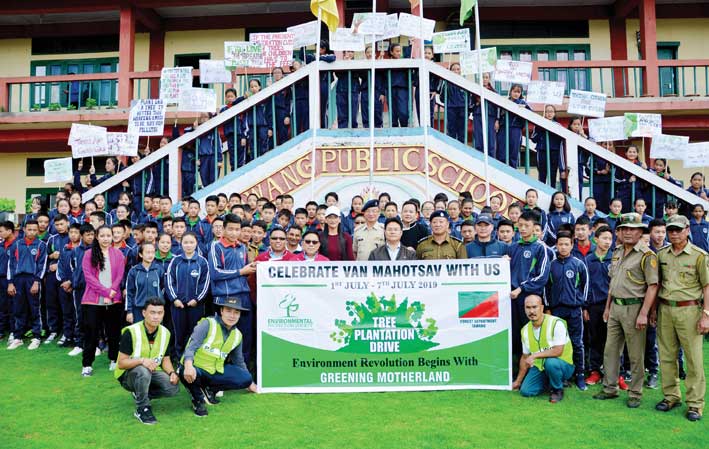 TAWANG/ NAMSAI, Jul 4: Over 200 plants of various species were planted at the Tawang Public School as part of the weeklong ‘Van Mahotsava Saptah’ here in Tawang district on Wednesday.
Earlier, the weeklong programme began in the district with plantation activities in and around the Tawang Army Brigade headquarters on 2 July.
The drive was held in collaboration with the Environmental Protection Society (EPS), an NGO which has been working in Tawang and other parts of the country towards protection of the environment.
Addressing students, DFO Sange Tsering and EPS president Jambey Dondu appealed to the people to plant at least one tree in their surroundings during this Van Mahotsava. They also requested all to “take care of the planted till it grows to a good height.”
On the occasion, Nima Drema, wife of Tawang MLA Tsering Tashi also participated, along with the senior officers from the district administration, police, public leaders and students of Tawang Public School.
At Namsai, Van Mahotsav was celebrated in the district headquarteron Thursday by conducting a massive plantation drive and free distribution of saplings.
Addressing the volunteers, Lekang MLA Jummum Ete Deori requested the Forest department to take the plantation drives to schools and Panchayats so that the importance of trees to combat global warming could be inculcated in the minds of students and villagers.
Deputy Commissioner Dr Tapasya Raghav urged everyone present to plant trees in their houses and offices as well and to spread the word about the importance of afforestation to more people, so that “this generation leaves something for to the future generations.”
She also asked everyone present to not limit themselves to just planting of the saplings but also to take care of the saplings that were planted today.
Over a hundred saplings of trees were planted today and the department will continue with similar programmes throughout the week.
Heads of departments and various NGOs also participated in the plantation drive with full fervour. (DIPROs)