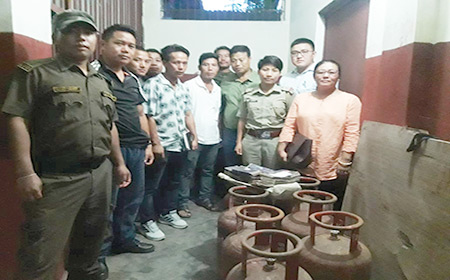 [ Karda Natam ]
DAPORIJO, Jul 19: A team of officers led by Magistrate D Apang and Sub-inspector N Ngupak seized a number of LPG cylinders during raids carried out in various parts of the township here in Upper Subansiri district on Friday.
The LPG cylinders were being hoarded by illegal operators with the aim of selling them in the black market.
The raids were conducted following complaints lodged by the All Upper Subansiri District Students’ Union (AUSDSU) against rampant black marketing of LPG cylinders.
An investigation is currently underway in this regard.
Meanwhile, the AUSDSU claimed that many poor families in the district have been unable for many months to procure LPG cylinders due to the malpractice going on in the district, especially in Daporijo.
The union said LPG cylinders are, however, available in the black markets in many places in the district, and are being sold at around Rs 1,200 to 2,500 per cylinder. It requested the district administration to “unearth the reason behind such malpractice and punish the culprit(s) involved.”
“Not even the officers are spared. They also come across many hurdles in getting LPG cylinders, and many officers have reported that they also have to buy cylinders for the said amount from the black market,” it said.
Stating that the administration has failed to initiate stringent steps to curtail such practice in the district, it urged the administration to “cancel all the enterprises dealing with LPG cylinders if they are found to be in nexus with the black market operators.”