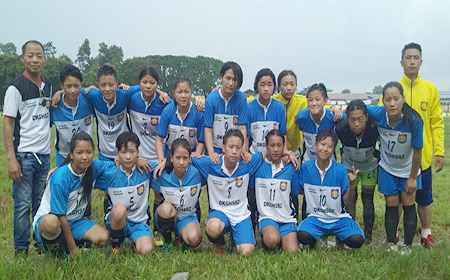 ITANAGAR, Jul 22: Dani Kunia GHSS, Ziro and GSS Pachin will face each other in the final of the state level Subroto Cup (U-17) football tournament for the girls.
Both the teams made it to the final through penalty shootouts.
While Dani Kunia GHSS, representing Lower Subansiri district, entered the final after beating GHSS Yingkiong (Upper Siang) 2-0 in the first semifinal, GSS Pachin, representing Capital Complex, secured their place in the final after defeating GHSS Boleng (Siang) 3-0 in the second semifinal played at the DNGC playground here on Monday.
For Dani Kunia School, Kago Assung and Talo Riya converted their spot kicks, and Jyoti Sonam, Dadda Jirdum and Tadar Nirmi netted for GSS Pachin in the penalty shootouts.
The final will be played on Tuesday at the same playground at 2 pm.
Meanwhile, the organizer stated that the set deadline for participation by the states in the national level Subroto Cup tournament is 30 July, “due to which the department has been left with no choice but to continue the tournament as scheduled, despite the bad weather conditions.”