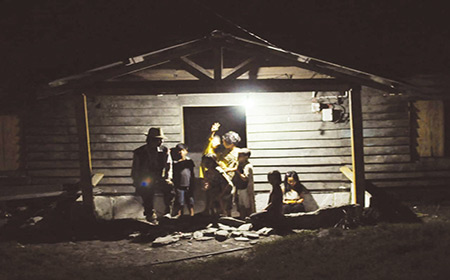 [ Karyir Riba ]
ROING, Jul 24: The Jumupani Government Residential School (JGRS) under Hunli-Desali circle in Lower Dibang Valley district became the first school in Arunachal Pradesh to have its own power generating system to meet the power requirements of the school.
This achievement was made possible after a team from the Technical University of Munich (TUM), Germany, led by former ZPM Anjite Menjo, in collaboration with the Batti project, a flagship programme of a Bangalore based NGO ‘Further and Beyond Foundation’, selected the school to carry out its pilot project.
Last year, a team from TUM had conducted a survey in LDV and Anjaw districts to check the feasibility of having a mini community-run sustainable power generating system using renewable energy. The team identified JGRS for their pilot project, since there was no power supply and road connectivity in the village.
The programme is designed to be self reliant and self sustaining with a capacity to scale, when required.
The system is powered using water from a nearby stream and solar PV panels, and generates 1.2 kw power.
Besides providing 24 hours of electricity to the school, it also has capacity to supply limited power to 11 households of the village.
The team has also installed six street lights in the village.
Co-founder of the Further and Beyond Foundation, Merwyn Coutinho informed that “the system will not have any operating cost as it is solely powered through locally available renewable resources. However, regular maintenance will be required to extend the longevity of the system.”
He said the NGO will train a local from the village to conduct regular maintenance of the system. A fee of Rs 100 per month will be collected from every connected household for periodic maintenance and equipment replacements.
Coutinho opined that electrification of the school with this project will not only help the school to perform better, but is also likely to motivate parents in neighbouring villages to send their children to the school.
He further added that apart from the school, more than 50 villagers will also have access to electricity for the first time. This will hugely improve the quality of life and safety in the village.
The excess power generated during times of low demand may also be used to run certain productive loads, such as millers and grinders in the future, which can improve the quality of the end product produced by the villagers and can bring in a higher income. Additionally, electricity allows women in the area to weave after dark, which is a common practice in Arunachal Pradesh to generate income. This further strengthens the women’s role in the family and society.
This project has been funded through a crowd funding campaign, individual donors and CSR programs of Luminous Power Technologies and COPPRROD Industries.
A team of volunteers from across the state and NE India were instrumental in building the system. They also helped in painting the school and fixing the toilets to make it more functional.
The entire project took the team seven weeks from start to finish.