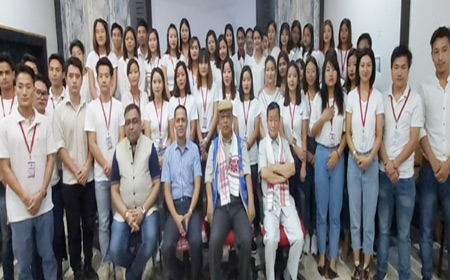 GUWAHATI, Jul 29: Arunachal Pradesh Skill Development & Entrepreneurship (SDE) Minister Tumke Bagra has requested the Centre to “extend the Pradhan Mantri Kaushal Vikas Yojana (PMKVY) beyond March 2020 with cent percent provision for residential training.”
Speaking during a review meeting between union SDE Minister Mahendra Nath Pandey and the SDE ministers of the Northeast states here in Assam on Monday, Bagra said retention after placement is one the challenges which require “migration support” in cities.
Bagra said his state has set a target to impart training to 29,510 people under the centre-sponsored, state-managed component of the PMKVY, “for which 3,890 people have already been enrolled in the portal, 2,812 have completed training, and 545 have been given placements.”
He urged the union minister to appoint more NGOs under the Jan Shikshan Sansthan, “so that skill development training can reach the illiterates, neo-literates and school dropouts.”
He informed that the National Apprenticeship Promotion Scheme could not be implemented effectively in Arunachal due to the absence of industries, and requested enhancing the stipend of apprentices at par with the minimum wages in the state, at an amount of Rs 10,000 per month from the existing stipend of Rs 1,500 per month.
Bagra also requested for inclusion of Arunachal in the technical intern training programme for skill training in Japan, under the MoU signed between India and Japan.
Informing that “there is no presence of National Skill Development Corporation and Sector Skill Council in the state,” Bagra requested setting up the offices in Arunachal for effective implementation of the skill development schemes.
He also requested for establishment of 25 Pradhan Mantri Kaushal Kendras, in every district of the state, and pleaded for construction of a “state kaushal bhavan.”
Union SDE Secretary KP Krishnan informed that the PMKVY will continue beyond March 2020 and migration support in cities would duly be addressed.
The union SDE minister in his address said the Centre is making “continuous efforts to scale up the existing efforts to enhance skill development in India, in the context of the country’s transition to a knowledge-based economy, through the creation of a professional skilled workforce.”
Schemes such as the Kaushal Vikas Yojana, Kaushal Kendra, Jan Shikshan Sansthan, apprenticeship, Industrial Training Institutes (ITI), and National Skill Training Institutes (NSTI) were reviewed on the basis of consolidated data collected in the past four years.
The house also discussed factors like building the capacity of state skill missions, with focus on job creation. The house noted that there is a shortage of facility for training trainers at the ITIs and the NSTIs. The SDE ministry has decided to set up a national skill training institute in the region.
Later, Bagra, along with Arunachal Pradesh SDE Director Subu Tabin, visited the training centre implementing high-end skill development training under the Chief Minister’s Yuva Kaushal Yojana at Jetwings, Guwahati, and interacted with the trainees.
The minister motivated the candidates to take the training seriously, and to learn the nitty-gritty of the aviation sector to get good placements in airlines and stand up to the expectations of the department and their families.