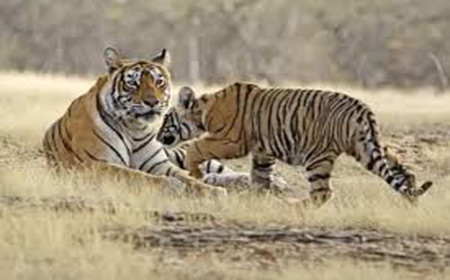 NEW DELHI, Jul 29: With 526 tigers, Madhya Pradesh has regained the coveted ‘tiger state’ tag after having lost it to Karnataka nearly a decade ago, thanks to its focus on conserving the wildlife outside the protected areas of reserves.
The All India Tiger Estimation Report 2018, released in New Delhi on Monday by Prime Minister Narendra Modi, revealed that Madhya Pradesh is home to 526 big cats, the highest in any state.
Arunachal Pradesh recorded 29 tigers.
Madhya Pradesh, which is home to nearly half a dozen tiger reserves, had the largest number of striped animals as per the 2006 census. But it had slipped to No 2 position in 2010, when Karnataka emerged as the ‘tiger state’.
It further slid to No 3 after Uttarakhand, with Karnataka maintaining its lead in 2014, as well, in terms of population of the majestic beasts.
Modi, while releasing the report, said the country has emerged as of one of the biggest and safest habitats for tigers in the world.
The tiger population in the country has increased from 2,226 in 2014 to 2,967 in 2018, according to the report.
Karnataka is a close second with 524 tigers, followed by Uttarakhand with 442.

South Asia reaching carrying capacity; SE Asia may lose all tigers: GTF
Meanwhile, international conservation body Global Tiger Forum (GTF) on Monday hailed the rise in tiger population in India and noted that the South Asian countries were doing well to protect the species.
It, however, expressed concern over the status of wild tigers in SE Asian countries.
Tigers are almost facing extinction from Cambodia, Laos and Vietnam, while there have been no recent updates from China and Indonesia, according to the GTF, an inter-governmental international body meant for conservation of tigers.
GTF secretary-general Rajesh Gopal said South Asian countries are very close to their carrying capacity of tigers and the number may not go further up.
Carrying capacity is the number of animals a region can support.
“The status of wild tigers in South Asia and Russia range from sub-optimal to optimal but the situation is comparatively much better than wild tiger status in Southeast Asian countries,” he said
While India has 2,967 tigers, other south Asian countries also fared well, with Nepal having 235 tigers in 2018, which has increased from 121 in 2009.
Gopal, however, expressed concern over the situation in Southeast Asia, and appealed to all TRCs to appraise it about the tiger statuses.
“There is no recent update from China and Indonesia. Wild tigers are almost extinct in Cambodia, Laos and Vietnam.
“The GTF appeals to other TRCs for time bound appraisal of wild tiger status within their country for strengthening the ongoing Global Tiger Recovery Programme (GTRP),” it said.
The GTF was formed in 1993 on recommendations from an international symposium on tiger conservation in New Delhi. The first meeting of the tiger range countries to set up the forum was held in 1994, in which India was elected to the chair and was asked to form an interim secretariat. (PTI)