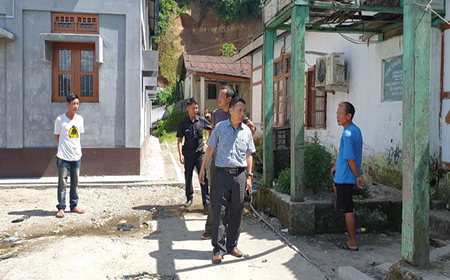 NIRJULI, Aug 5: Additional District Magistrate (ADM) Talo Potom on Monday inspected the old directorate office of the animal husbandry, veterinary & dairy development (AHV&DD) department at D Sector here after receiving a written complaint from the department that the office premises was being encroached on.
Potom informed that walls are being constructed within the directorate’s premises, and said legal action would be initiated against those who have encroached on the government land.
“Notice will be served tomorrow to those who are illegally constructing the walls,” said Potom.
“We will ask them to remove the walls and vacate the land, but also, we will take legal action against them under Section 4 of the APPP Act,” he said, and urged the public not to indulge in illegal activities.
The campus had been used as the office of the AHV&DD directorate till 2015-16, before the directorate was shifted to the new site near the NERIST here.
According to the complaint submitted by the department to the capital complex DC, the old building has been earmarked for construction of departmental infrastructure in the future.
It also stated that some people have illegally erected concrete structures and a boundary wall within the department’s campus in an effort to encroach on the office premises.