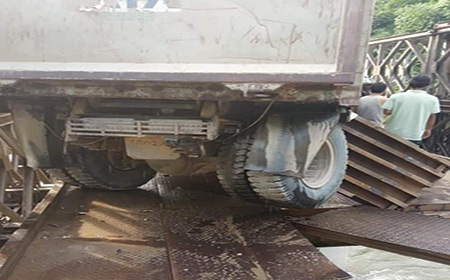 ITANAGAR, Aug 13: Heavy vehicles plying between Itanagar and Lower Subansiri HQ Ziro have been temporarily diverted to the Kimin-Potin route, following damage to the steel bridge over the Dikrong river at Hoj on Tuesday.
“Light vehicles can ply on this route,” said Papum Pare SP Pranav Tayal, and asked drivers of heavy vehicles to take the Kimin-Potin road until the bridge is repaired.
As per reports, vehicular movement came to a halt as the iron plates on the Hoj bridge got displaced. A police team that visited the spot informed that the movement of heavy vehicles on the route has to be halted temporarily because of the condition of the bridge.