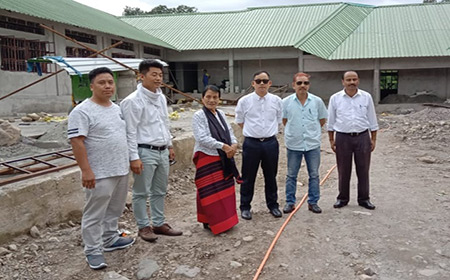 DAMBUK, Aug 17: Local MLA Gum Tayeng has asked road construction agency BIPL to cooperate with the public in completing the flood protection work at the Sisiri river.
She said this while addressing the HoDs of Dambuk subdivision in Lower Dibang Valley district during a meeting on Saturday.
The issues of flood protection work and the problems faced by the people in low-lying areas due to flooding of the river were discussed at the meeting, during which it emerged that the BIPL was responsible
for rampant dumping of soil, which led to floods during the rainy season.
The MLA asked the BIPL to provide machineries for carrying out flood protection work, and urged the public also to contribute from their end for the purpose.
The HoDs apprised the MLA of the developmental activities being undertaken by their departments, and shared the problems faced by them due to insufficient manpower, lack of infrastructure, etc.
The MLA assured to take up the issues with the higher authorities, and advised the government officers to work with dedication for the welfare of the people.
ADC Rujjum Rakshap also attended the meeting. (DIPRO)