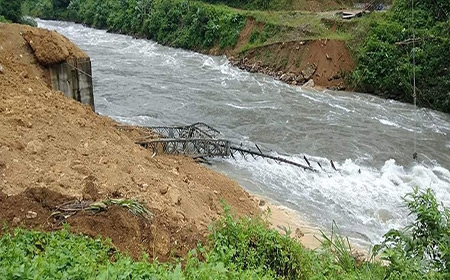 PALIN, Sep 17: The Bailey bridge over the Kumey river at Kuwa in Tali circle of Kra Daadi district, which was the lifeline for the people of Tali, collapsed on Tuesday morning.
The bridge connected Tali to Yangte circle in the same district. With its collapse, the Tali assembly constituency has been cut off from the rest of the state.
Speaking to this daily, Kra Daadi DC S Miji informed that he has directed Tali ADC B Sorum and PWD EE Bamang Raju to visit the site and find out the exact cause of the incident.
The bridge was reportedly constructed at a cost of Rs 14 crore by the PWD and was yet to be officially inaugurated.
“The department along with the district administration had conducted load testing some months ago. After that, people had been using the bridge to cross the river. With the collapse of this bridge, the dream of connecting Tali with a road has been pushed back by a decade,” said a local resident.
Tali is the only assembly constituency in the state which is yet to be connected by road. It does not have any alternative road connection.