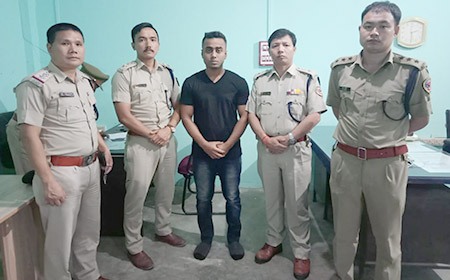 ITANAGAR, Oct 11: Montosh Saha, who was wanted by the police for delivering a communally-charged hate speech in Naharlagun on 9 October, was arrested on Friday evening.
Speaking to media persons while participating in an illegal rally, Saha had on Wednesday threatened the capital’s indigenous communities with an economic blockade.
Informing about the arrest, Capital SP Tumme Amo said Saha was wanted for spreading communal disharmony and making hateful speech in a public place during
the protest staged by a group of non-APST people in Naharlagun on Wednesday.
Amo said 23-year-old Saha has been arrested vide Naharlagun police station Case No 170/19 u/s-153, 153 (A), 506, 34 IPC, and that the accused has been remanded to seven days’ judicial custody.
Meanwhile, the SP appealed to all sections of the society to maintain peace, tranquility and communal harmony.