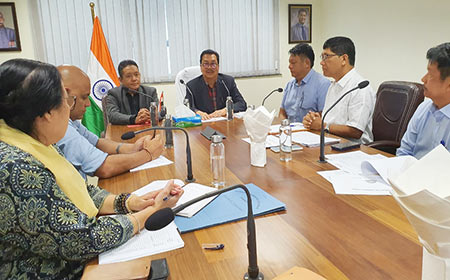 ITANAGAR, Oct 23: Deputy Chief Minister Chowna Mein has called for proper utilization and timely implementation of budget schemes by the government departments. He said this while reviewing the implementation of budget schemes for the year 2018-19 & 2019-20 under agriculture & horticulture departments here on Wednesday.
He urged the Finance, Planning & Investment department to monitor the progress of budget announcement in order to ensure proper implementation of the schemes.
‘Ever since Chief Minister Pema Khandu assumed office, the state government has made the budget estimates with a clear cut decision and proper planning after prolonged exercise including holding consultation with all the stakeholders. To boost the rural economy, the agriculture and horticulture sectors have been given priority and funds were placed in the budget estimate accordingly for doubling the farmer’s income,’ Mein said.
While lamenting the department for failing to distribute Rubber Saplings that was developed in the Farmer’s Training Centre at Kherem in the year 2017-18, he said that it resulted in the wastage of state exchequer which should not have happened. He called for drawing a calendar of activity in tandem with the crop seasons and to implement all the schemes on right time without further delay.
“Govt is willing to provide additional fund in agriculture and horticulture sector if the department shows good results,” he said, while stressing the need that 100 % benefits should reach the farmers.
Principal Secretary, Ashish Chandra Verma assured to hold review meeting every 15 days to monitor budget implementation and expenditure, while Planning Secretary, Himanshu Gupta informed that the guidelines for all the schemes have been approved and the implementation can be started without any further delay as per the guidelines.
Among others, State Legislative Assembly Speaker PD Sona, Agriculture & Horticulture Secretary Bidol Tayeng, Finance Secretary Y W Ringu, Agriculture Director Anong Lego, SHRDI’s head Egam Basar and senior officers from the departments were also present in the meeting. PRO