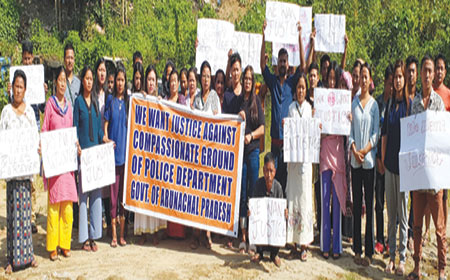 Staff Reporter
ITANAGAR, Oct 30: Alleging irregularities in the selection procedure for recruitment under the police compassionate ground scheme, 183 candidates are currently on a 72-hour protest here at the Indira Gandhi Park.
The protest that started on Tuesday will end on Thursday.
The candidates alleged that the Police Department did not follow proper procedure while conducting recruitment for the post of constable under the compassionate ground scheme.
Terming themselves as “victimized candidates,” they had earlier held a protest outside the police headquarter near here on 9 October. They have also threatened to launch an indefinite hunger strike if authorities do not address their grievances.
The candidates informed that they have laid down their grievances to the director general of police recently, but claimed that they are “yet to get justice.”
The group has demanded for fresh selection procedure on the basis of seniority and as per the death certificate of legal heirs of the deceased.
It needs to be mentioned that around 325 candidates from 508 applicants have been selected, while 183 candidates have not.