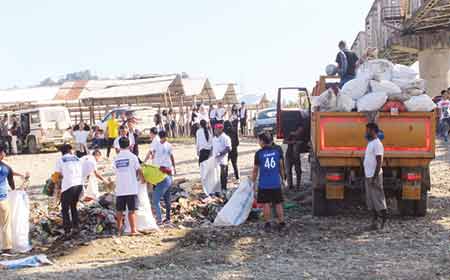 DOIMUKH, Nov 12: Around 500 volunteers carrying jute trash bags carried out a cleanliness drive on the bank of the Dikrong river near the weekly Saturday market here in Papum Pare district on Tuesday.
Initiated by the Rajiv Gandhi University Research Scholars’ Forum (RGUSRF) and the Youth Mission for Clean River (YMCR), the cleanup saw huge participation by students from RGU, the NERIST, the Venkateshwara Open University, local residents, and volunteers from the Saturday Market Group and the Doimukh market committee.
Assistant professor in RGU’s social work department, John Gangmei, said the idea was “not to work ‘for’ but ‘together’ with the community, so that the cleaning becomes a habit and not a one-day stunt.”
Stressing the need to have a better world, cleaner water and a great ecology, he said, “Today we are here at Dikrong. We are not the only ones affected. We have the upstream and downstream, so the river problem does not end here. The problem exists till it reaches the Bay of Bengal, joining the Brahmaputra in Assam, and so on.”
Gangmei said it was the duty of the market committee, the shopkeepers, the daily wage earners, picnickers, students, civil organizations and other stakeholders to organise such cleanliness drives on a weekly or monthly basis.
YMCR chairman SD Loda applauded the initiative, and said that when he had “started the movement in 2017” he did not think it would attract such popularity and mass participation.
“Children and youths should be involved in such initiatives to inculcate awareness about river cleanliness from a young age itself,” Loda said.
He urged the people of the state to “realize how the rivers are vanishing and take up voluntary initiatives to protect them.”
“With the groundwater depletion in various parts of the country, keeping our rivers clean is the need of the hour and people should start taking it seriously, before it is too late,” he added.
Saturday market proprietor Nabam Tade thanked the volunteers, and said he had himself earlier taken “several initiatives” to control the visit of picnickers to the riverside, so that less litter is dumped.
“But after the establishment of the Saturday market, which became a hub for vegetables and other household items for RGU, NERIST, ITBP, NDRF, NIT, Nirjuli and the local people here, it became impossible to keep an everyday check on the riverbank,” he said.
Tade also lamented the government’s apathy towards providing fund to construct protection walls along riverbanks. He said he did not get any government aid for the protection walls that he has had constructed.
Doimukh market committee general secretary Naga Taha said the river is not only being polluted due to polythene and garbage dumping but also due to earth-cutting. He expressed hope that more such cleanliness drives would be carried out in the days to come.
RGURSF general secretary Prem Taba said “one of the prime objectives of the mass drive is to make the local residents and other stakeholders along the banks of the river realize the importance of the river and avoid dumping near it or into it.”
Taba informed that a week before the cleanup, a door-to-door campaign had been conducted in Doimukh, inviting people residing nearby to help clean the litter from the riverside.
“Leaflets were also distributed to spread awareness. The exercise was carried out as our agenda is not just to clean the river for a day but to engage the local communities and get them to participate,” he said.
“Over the years, this once pristine river is experiencing severe degradation due to unchecked festival rituals, mining, and other commercial activities,” Taba added.
RGURSF co-convenor Yura Bathey said “the government should also think about constructing waste treatment plants to meet the amount of garbage that are produced and collected every day.”
The nearly two truckloads of collected garbage were handed over to the urban development & housing department. No single-use plastic was used during the cleanliness drive, which was supported by the DMC, the NRSA, the RGUSU, the SUN, Renu Beverage, and VoU.