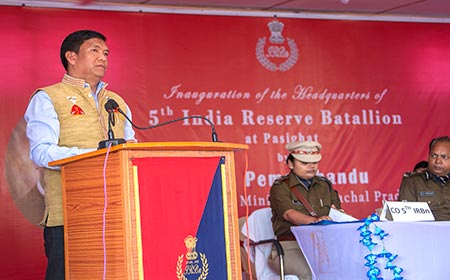 PASIGHAT, Nov 25: Chief Minister Pema Khandu on Monday inaugurated the headquarters of the 5th Indian Reserve Battalion (IRBn) here in East Siang district, and paid tributes to the state’s police personnel.
The CM particularly thanked police personnel “who are silently discharging their duties diligently and honestly and whose contributions never got highlighted through medals.”
He described such police personnel as “unseen heroes who are working for the development of the state without the desire to be noticed.”
Khandu urged the police to always maintain dignity and respect, and not indulge in corruption. He said “not all are bad, but a few of them are, and must be identified,” and also exhorted the IRBn personnel to “maintain the highest reputation of their battalion.”
Stating that “the state government has high priority for providing best infrastructures and facilities to police personnel,” the CM said permanent infrastructures with all facilities and basic amenities would be made available to the police personnel posted in all the districts.
To strengthen the IRBn, Khandu said a regular commanding officer would be posted “instead of dual charges assigned to a police officer.” He also advocated conducting regular refresher courses for police officers “to keep them motivated and to make them aware of the latest trends.”
The chief minister informed that Pasighat would “soon see the opening of a World War II museum, where machineries recovered from Arunachal from the war era will be on display.” He informed that the museum will be inaugurated by the US ambassador.
Home Minister Bamang Felix and MLAs Ninong Ering, Kaling Moyong, Ojing Tasing, Hayeng Mangfi and Lombo Tayeng also attended the event. (CMO)