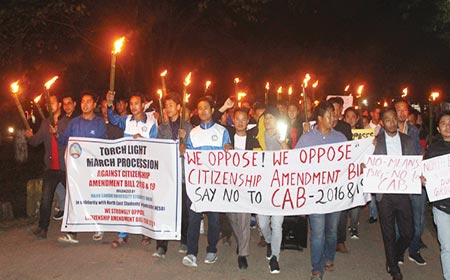 Staff Reporter
RONO HILLS, Nov 25: Hundreds of students of Rajiv Gandhi University (RGU) took out a mashaal juloos (torchlight procession) at the varsity campus here on Monday in protest against the proposed citizenship amendment bill (CAB).
The students burnt the effigies of Prime Minister Narendra Modi and Home Minister Amit Shah, and shouted slogans against the bill and the BJP-led governments at the Centre and in the state.
Coming down heavily on the government, North East Students’ Organisation (NESO) coordinator Pritam Waii Sonam said, “Instead of announcing developmental packages for the Northeast region, the central government is only giving us AFSPA and CAB.”
Sonam said “there will be no more requests, prayers, or appeasement from the indigenous people of the NE. We will take out democratic protests against this bill till our last breath.”
Lamenting the apathy of the central government, the NESO leader said “the All Arunachal Pradesh Students’ Union (AAPSU) has been fighting against the illegal refugees – Chakmas and Hajongs – for the last 50 years, but the Modi-led central government has overridden it in one single night, which has deeply hurt the indigenous sentiments.”
RGU Research Scholars’ Forum general secretary Prem Taba said the CAB is not an ordinary bill “but a directive from the central government to kill the indigenous people.”
“The bill, if implemented, will completely annihilate the tribal population in the state. The government is not doing enough for its own people, and on the other hand they want to bring in the illegal refugees. The number of agitations taken out by indigenous communities northeast-wide in the recent past itself is a manifesto of how detrimental the bill can be,” Taba said.
“There should be no bargaining in this; we demand complete scrapping of the bill,” he added.
RGU Students’ Union president Dopum Sonam said the union would submit a memorandum to the PM, through the governor, after the procession, and accused the central government of having become “pro-refugees and anti-indigenous.”
“We will not rest. Our protest will continue until the bill is completely revoked,” Sonam said.
Apart from RGU students, representatives of the NESO, the AAPSU, the Arunachal Students’ Union Shillong, the Students’ Union of NERIST, the NERIST Research Scholars’ Association, and various other student organizations took part in the procession.
This is not the first time that the university’s students have taken out such a protest. On 9 February, while the prime minister was inaugurating and laying foundations of projects in the state at IG Park, students of RGU had boycotted the PM’s visit, burnt his effigies, and staged protests denouncing the CAB.