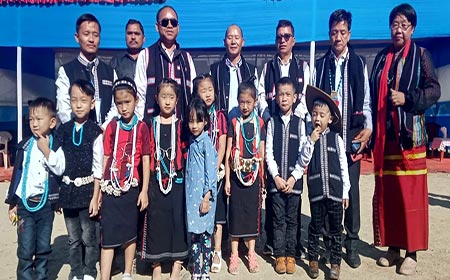 Tribal languages to be introduced in schools: Natung

Staff Reporter
ITANAGAR, Dec 5: The Adi community has celebrated Podi-Barbi festival with traditional fervour and gaiety at Mopin-Solung ground on Thursday with people from different walk of lives. Podi-Barbi is a harvesting festival of Adi community especially of Shi-Yomi district.
Attending the celebration, Youth Affairs and Sports Minister Mama Natung lauded the community for its rich culture and tradition.
“One cannot find the zest of our rich culture and tradition in Google or any other sources but it has to be inherited from our ancestors”, Minister said.
Stating that every tribal community has to have written script minister said that State government will soon carry out a research programme through art and culture department.
“To promote and to preserve the tribal languages, the state government has already taken a decision to introduce local languages in every government school of the state” said Minister.
National executive member Kishan Morcha, Taro Pussangg also stressed on the preservation of culture and tradition.
He also appealed the youths of the community to uphold their traditions, while moving simultaneously with modernity.
While elaborating on the mythology of Podi Barbi festival, organizing president of PodiBarbi festival 2019, Tasap Kochung also urged the gathering to maintain the sanctity of every festival and appealed the community leaders to be torch bearer for the others.
Beside regular event, alter (Zazina), Momen ponung, cultural event and community feast were also organized to mark the day. Mainly celebrated by the Adis of Mechuka, Monigong and Tato of Shi Yomi district, the Podi-Barbi is an occasion to extend gratitude to deities and Mother Nature for prosperous and surplus crops.
The Adi community of West Siang district celebrated Podi Barbi with traditional gaiety and religious fervour at GuminKiin here on Thursday.
Greeting the people on the occasion, former Minister JarkarGamlinn said, “Religion and culture are different entity and essence of all festivals are alike, to give us all a distinct identity. Festival is always a rare occasion to rejoice and expose our rich practices, attires, beliefs and all communities should take part in each other’s festivity.”
The former MLA also inaugurated the Lik Putu Podi Barbi Community Hall on the occasion.
He also released an audio album titled ‘HoHoHogalo’ which is produced by Jyoti Diru and Yasen Bunyi and gave away prizes for the games and sports and cultural competitions which were held as part of the celebration. (DIPRO)