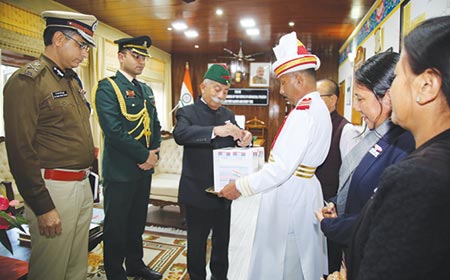 ITANAGAR, Dec 7: Along with the rest of the country, the Armed Forces Flag (AFF) Day was observed here on Saturday with people from all walks of life making contributions to the AFF Day fund, which will be used for the welfare of battle-fallen heroes, veer naris, the war-disabled, ex-servicemen, and serving personnel of the armed forces.
Governor BD Mishra donated to the fund at the Raj Bhavan here. Stating that “every penny of the contributions will go for the welfare of armed forces personnel,” he urged the people to “continue their goodwill towards the armed forces.”
The Raj Bhavan AFF Day team also collected contributions from RWD Minister Honchun Ngandam, UD Minister Kamlung Mosang, Home Minister Bamang Felix, Sports Minister Mama Natung, and Education Minister Taba Tedir, besides government officials, media persons, and others.

BRO organises plogging progs
Meanwhile, the Border Roads Organisation’s (BRO) Project Arunank
organised plogging programmes (picking up litter while jogging) at Naharlagun, Daporijo, Koloriang, Yazali and Kimin on Saturday to mark the AFF Day.
At Polo Park in Naharlagun, around 110 BRO officers and personnel, along with civilians, including children, took part in plogging.
Addressing the participants, BRO CE, Brig AS Chonker, motivated everyone, especially children, to maintain cleanliness and stay fit. He stressed on active participation of Project Arunank in such activities to create a clean environment throughout the state.
Similar events were also organised at Nirjuli, Damsite and other areas by BRO officers and personnel.
Plogging was also carried out by Dera Natung Government College (DNGC) here. Around 200 NCC cadets took part in it, plogging all the way from RK Mission Hospital to the college campus.
Later, addressing the cadets, DNGC Principal Dr NT Rikam recalled the contributions of the Army, the Navy and the Air Force towards keeping the nation safe and secure.
He also briefed the cadets on Prime Minister Narendra Modi’s ‘Fit India’ mission. (With Raj Bhavan input)