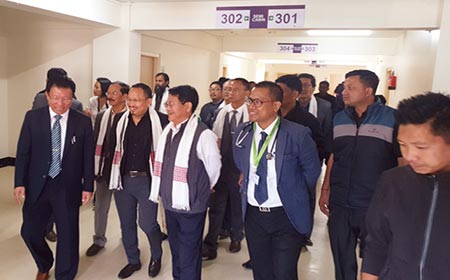 Staff Reporter
NAHARLAGUN, Dec 21: The newly constructed Dr Taba Nirmali wing of Niba Hospital here, which houses the state’s first in vitro fertilization (IVF) centre, was inaugurated by PHE&WS Minister Wangki Lowang on Saturday, on the occasion of the hospital’s 20th foundation day.
The IVF centre will be run in collaboration with Pune (Maharashtra)-based ASHA IVF Centre.
The new wing will also have a CT scan centre and a new OPD block.
Education Minister Taba Tedir, who is the husband of Niba Hospital’s founder, late Dr Taba Nirmali, informed that with the opening of the new IVF centre, the people of the state would no longer have to go outside the state to avail the medical facility.
“It has been the sole objective of this hospital to provide the state’s patients with better and affordable treatment, so that they do not have to go outside the state,” he said.
He also informed that a ‘Dr Taba Nirmali Fund’ has been created, under which a cancer screening unit will be established in Niba Hospital, starting next year.
Lowang on his part hailed the contributions of Dr Nirmali in the field of health services and advised the doctors and staff of the hospital to follow the path shown by the late doctor and perform their duties selflessly.
TRIHMS Director Dr Moji Jini, who was also present, spoke about the growth and transition of medical services in the state.
He said Niba Hospital, which started as a 50-bedded hospital, has now, with the addition of the new wing, been upgraded to a 70-bedded one.
Highlighting Dr Nirmali’s contributions to the state’s health services, besides her initiatives for cancer treatment and cleft lip treatment, Dr Jini said, “After the death of her elder sister due to cancer in 1999, she co-founded the Arunachal Cancer Society. She also started the ‘Smile Train’ in her own hospital, which till date has provided free cleft palate surgery to over 600 people in need.”
Among others, Aalo MLA Kento Jini, ASHA IVF Centre founders Drs Ashish Kale and Ashwini Kale, gynaecologist Dr Bengia Mala, and retired doctor Mari Basar were present on the occasion.