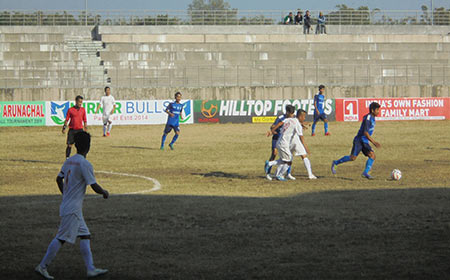 [ Prafulla Kaman ]
PASIGHAT, Dec 30: Hosts East Siang scored a goal in each half of the game to beat Dibang Valley 2-0 and register their second consecutive win in the 18th Tadar Tang State Level Football Tournament here in East Siang district on Monday.
Miding Tasung (10th min) and India Saroh (68th) were the scorers.
The hosts had beaten Lower Subansiri 2-1 in the inaugural match.
In total, four matches were played in the day.
Defending champion Arunachal Pradesh Police (APP) eased to a 4-1 win over Siang in the first match played at the CHF ground.
Joynath Mili scored a brace (31st and 71st mins) while Dojum Nomuk (55th min) and Talung Padu (62nd) scored a goal each.
The consolation goal for Siang was scored by Angel Panggam in the 80th minute.
In another match played at the main stadium, West Siang defeated Kra Daadi 2-0. Limar Loya and Beken Riram were the scorers.
On Sunday, West Siang had beaten Lower Dibang Valley 2-1.
The fourth and final match of the day was played between Leparada and Changlang, and the match ended in a 1-1 draw.
Gobom Bam put Leparada ahead in the 2nd minute, which was equalized by Changlang in the 35th minute. The equalizer was scored by Pongthung Rekhung.
On Sunday, Kurung Kumey and Changlang had won their respective matches against Leparada and East Kameng, and Kra Daadi had drawn 1-1 with West Kameng.
Today’s matches:
Kurung Kumey vs East Kameng, Lower Subansiri vs Dibang Valley, West Kameng vs Lower Dibang Valley, and APP vs Capital Complex.