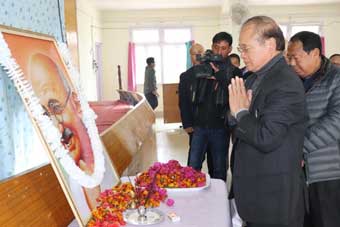 ITANAGAR, Jan 30: Arunachal Pradesh Congress Committee (APCC) president Nabam Tuki called for “maintaining communal harmony and national unity for safeguarding the security and integrity of the country.”
He was speaking during an ‘Ekta sammelan and inter-faith prayer’ organised by the APCC at the Arunalay Diocesan Pastoral Centre here on Thursday to mark the 72nd death anniversary of Mahatma Gandhi. The day is observed as Martyrs’ Day.
“The apostle of peace, Mahatma Gandhi, who stood for nonviolence, fell to the bullets of an insensate killer, Nathuram Godse, on 30 January, 1948. His murder was the murder of humanity and was an attempt to kill the soul of the nation.
Bapuji and other great freedom fighters and nation-builders wanted to build a country in which Indian society would be free from injustice, poverty, exploitation, opportunism and communalism. But today the country is passing through a critical time, where common people become its victims,” Tuki said.
Stating that communal harmony and national unity are being threatened by the BJP government at the Centre, he urged everyone to “fight against divisive forces and protect the values enshrined in the constitution of India.”
The rank and file of the Congress party paid rich floral tributes to the portrait of Mahatma Gandhi, while prayer groups from Christian, Donyi-Polo, Hindu and Muslim communities chanted prayers for peace, communal harmony and tranquillity in the country.
Former home minister James L Wanglat and Arunachal Christian Forum president Toko Teki were also present on the occasion.
DIPRO adds: The officers and staff of the capital complex administration observed a two-minute silence in memory of those who gave their lives in the struggle for India’s independence.