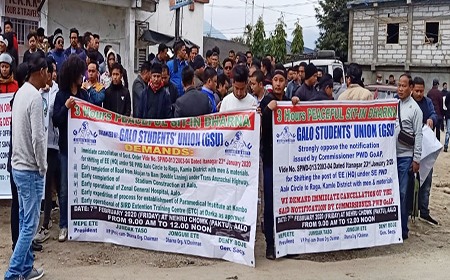 AALO, Feb 7: The Galo Students’ Union (GSU) on Friday staged a dharna at Nehru Park here in West Siang district to protest the state government’s decision to shift the office of the EE (HQ), Aalo, along with men and materials, to the Raga PWD division in Kamle district.
The GSU is demanding immediate cancellation of the notification issued to this effect by the PWD commissioner.
The union’s other demands include early construction of the Trans-Arunachal Highway from Akajan to Bam; making the zonal general hospital here and the SIRD extension training centre in Darka functional; and establishment of a paramedical institute in Kombo.
The union accused the state government of meting out ‘step-motherly treatment’ to the people of West Siang on the development front, and appealed for equality. It urged the elected representatives of the district to work in the interest of the district.
It said it would intensify its movement if the government fails to meet it demands.
Clarifying that the union is not against the ongoing Yomgo River Festival, GSU president Mepe Ete said the dharna was organised to express resentment over the government’s decision.
“Instead of inaugurating new developmental projects and announcing packages in Aalo, one of the oldest administrative centres and West Siang district in general, the state government is taking back important offices and projects from the area,” he rued.
Aalo Town People’s Development and Welfare Society (ATPDWS) chairman Kento Ete warned that “the people of the district would be compelled to launch a series of democratic movements in the coming days if the government continues to ignore the genuine demands.”
The dharna was supported by various social organisations and NGOs, including the ATPDWS, Mother Vision, the West Siang unit of the Abotani Clan Organisation, the Paktu Ao Youth Welfare Association (PAYWA), the Aalo Area Students’ Union, the HHSU, the KKSU, and the DPGC Kamki Students’ Union.
The All Aalo Students’ Union, the PAYWA and the GSU had submitted a joint memorandum, with a 15-day ultimatum, to the state government on Monday, the GSU president said, adding that they would be compelled to “go for further democratic agitation in entire Galo inhabited areas in case of non-fulfillment of the demands.”