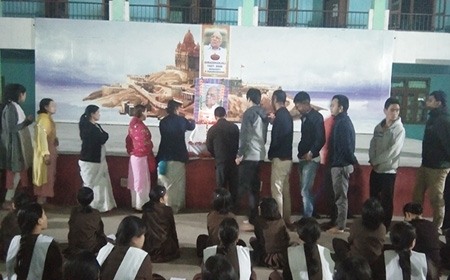 Staff Reporter
NIRJULI, Feb 9: A ‘shradhanjali sabha’ was held at the Vivekananda Kendra Vidyalaya (VKV) here in memory of prominent social figure and president of the Vikekananda Kendra, P Parameswaran, who passed away in the early hours of Sunday.
Recalling his contributions to the people of Arunachal and the nation, VKV Alumni Association secretary-general Giamde Tamin said the first VKVs were established in the state around 1977 under the initiative of Eknath Ranade.
“Late Parmeswaran was the president of the Vivekananda Kendra from 1995 till his demise. Under his active initiation, numerous VKVs were established in nooks and corners of the state, so that the objective of man-making and nation-building could be achieved by providing quality and affordable education. The 40th VKV in Namsai was only inaugurated recently,” he said.
“Today, in our state, you will come across VKV alumni, right from those in government jobs to the ones who have excelled in sports and different spheres of life,” Tamin said, adding that the contribution of the VKV as an organisation, and of late Parmeswaran as its president, has been immense.
The programme saw the participation of former state BJP chief Tai Tagak, students and teaching staff of VKV Nirjuli, RSS members, and VKV alumni.
Parmeswaran was one of the senior-most pracharaks of the Rashtriya Swayamsevak Sangh (RSS) and a former leader of the erstwhile Bharatiya Jana Sangh. He was honoured with Padma Vibhushan, the country’s second highest civilian award, in 2018, and the Padma Shri in 2004.
Born in 1927 in Muhamma, in Kerala, he had joined the RSS during his student days.