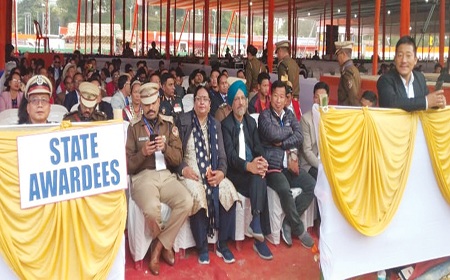 Staff Reporter
ITANAGAR, Feb 21: In a highly embarrassing incident, the state awardees who were to be honoured on the occasion of the 34th Statehood Day function at IG Park here on Thursday were made to wait the entire day, leaving only a smattering of audience staying back to witness the award ceremony.
The awardees included mountaineers Taka Tamut and Kishon Tekseng, who had risked their lives to locate the IAF’s An-32 aircraft that had crashed in the mountains in between Shi-Yomi and Siang districts last year; administrative officers who conducted the assembly and parliamentary elections in Kurung Kumey district in hostile situations; and police officers who tackled the anti-PRC riots, besides several others who have contributed immensely in their respective fields.
The function, which was scheduled to begin at 11:20 am, began at around 1 pm, owing to the late arrival of union Home Minister Amit Shah. The original programme was cut short, and the programme up to Shah’s speech was completed within an hour.
The audience started leaving their seats as soon as Chief Secretary Naresh Kumar ended his vote of thanks, and the entire delegation of dignitaries, including the governor and the chief minister, left to see off Shah and his entourage.
The only ones left at the venue were the state awardees and their families and friends, most of whom felt that the situation was “embarrassing.”
During casual discussions among the awardees, one said: “We haven’t been able to leave to use the washroom, nor have we had the time for lunch, anticipating that the dignitaries would be back any moment. I don’t know why they would want to honour us and insult us at the same time.”
“If they wanted to honour us for our services to the state, they should have done it appropriately. The chief secretary could have handed out the awards before or after the union minister’s arrival and not made us wait in such a manner,” said another awardee.
Despite repeated announcements that “his excellency and ministers will be back shortly,” the dignitaries returned after an hour and a half, at 4 pm.
During the entire time, most of the awardees did not leave their seats, and could not wander off far because of the repeated announcements that the dignitaries would return shortly.
The only respite was the light refreshments that were provided; but it wasn’t respite enough in the face of what someone aptly called “total disrespect.”