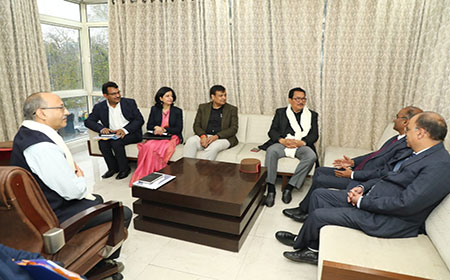 NEW DELHI, Feb 22: The chairman of Satluj Jal Vidyut Nigam Ltd (SJVNL), Nand Lal Sharma, has expressed “eagerness” to develop hydropower projects of upto 15000 mw in Arunachal.
Sharma along with his business development team called on Deputy Chief Minister Chowna Mein during the latter’s tour to the national capital, and handed over a written request to the DCM on Saturday, stating the firm’s interest.
Mein gave assurance to the team that he would look into its proposal.
The SJVNL is a joint venture company of the Centre and the Himachal Pradesh government, and has a ‘Mini Ratna’ status.
A team from the Jindal South West (JSW) Energy Ltd, led by its vice-president PK Puri, also called on the DCM and submitted the firm’s interest in developing hydropower in Arunachal. The JSW team
submitted an expression of interest in developing a few mega hydropower projects in the state.
Emphasizing on “development of the state with people-first approach at the top of any policy decision making of the government,” Mein invited them to invest in the state, and said the state government would extend all possible assistance as a partner in the development process.
Earlier in the day, Mein visited the Arunachal Pradesh food stall at Oudh, The Ashok, where traditional organic foods of the Northeast are being showcased from 21 to 23 February.
On the second day of the three-day food festival, Myanmar’s Ambassador to India, U Moung Wai, also visited the Arunachal food stall.
Mein was accompanied by Arunachal PRC Jitendra Narayan and Hydropower Development Chief Engineer RK Joshi. (DCM’s PR Cell)