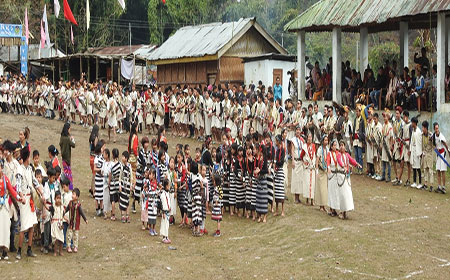 Staff Reporter
ITANAGAR, Feb 26: Nyokum Yullo, one of the largest agricultural festivals of the Nyishi community was celebrated across the state with great fanfare and traditional fervour on 26 February.
Attending the festivities at the Doimukh ground, Union Minister of Social Justice & Empowerment Ramdas Athawale called on the people to write to him personally if they are yet to receive the benefits of the AWAS Yojana or the Pradhan Mantra Ujjwala Yojana.
Advising the audience to place their grievances with the local MLA Tana Hali Tara, so that they could be taken up urgently, Athawale assured to give his approval to their requests.
He also appreciated the colourful attire and cultural performances, and uttered several slogans, such as “Mere aane se jaag gaya hai Doimukh sara; main baja dunga tere dushmano ke bara” and “Jab main dekh raha tha tumhara dance, toh mujhe yaad aa raha tha France.”
Athawale mainly spoke on the schemes of the central government, and the promises of the Modi-led government.
“I will keep coming to the NE states to fulfil the promises made by the Modi-led govt,” he said.
Cultural presentations and community feast were also part of the celebrations.
Nyokum was also celebrated in various other places of the capital, including Itanagar and Nirjuli.
Attending the 45th Nyokum Yullo festival celebration at Chayang Tajo in East Kameng district on Wednesday, Deputy Chief Minister Chowna Mein has said that the state government is taking every possible measure to protect, preserve and promote the rich cultural heritage of the state and the indigenous local dialects.
He informed that the Indigenous Affairs department has taken up the schemes on digital documentation of old traditional practices to preserve, promote and protect the rich traditions and culture of various tribes of state. “The government has introduced indigenous local dialects as the third language in government schools,” Mein said.
Mein further said that the celebration of the Nyokum festival is a good opportunity for the community to come together and pass on the ethos and values of rich culture to the next generations. “Like all festivals of Arunachal Pradesh, Nyokum Yullo provides an opportunity to the members of the Nyishi community to display the unique cultural richness and traditional heritage of their community,” he added.
Highlighting development activities of the government, Mein said that in an effort to involve all the stakeholders in the development process, pre-budget consultative meetings were held with various community based organizations (CBOs) of the state. He called upon the young generation to stay away from drugs and encouraged the students to excel in their lives and develop a competitive spirit.
Mein also announced to develop the old hostel building of Vivekananda School and assured to provide a new hostel block and teachers quarters for the Vivekananda School at Chayang Tajo. He also asked the concerned department to submit the proposal at the earliest for ‘development of the transmission and distribution line for evacuation of power from 2X100KW Rapo MHS which will cover seven villages of the area.’
While responding to the two-point memorandum submitted by the Nyokum Yullu celebration committee, Mein assured to resolve the issues at the earliest.
Earlier, Mein inaugurated the water treatment plant for Chayang Tajo township, visited Vivekananda School and government polytechnic college, Chayang Tajo and assured the people to improve the mobile connectivity and banking services in the area.
The Nyokum Yullo celebration committee also facilitated the pioneer of their society, Choma Yangfo. Yangfo was the first chairman of Nyokum Yullo festival, who had immensely contributed for the welfare of the society and Nyokum festival at Chayang Tajo.
At Kamle district’s Boasimla, Basar MLA Gokar Basar exhorted the youths to take pride in their rich culture and tradition and be the torch bearers in its preservation.
“The community identity and civilisation is professed through the festival celebrations and rituals,” he said and encouraged youths to participate in large numbers.
Earlier, Raga MLA Tarin Dakpe briefed about the mythology and genesis of Nyishi Nyokum Yullo.
Colourful songs and dance performances marked the celebrations.
At Yupia (Papum Pare), Dumporijo MLA Rode Bui exhorted the upcoming generations to preserve, protect and promote the age old tribal faith, tradition, culture and language.
He underlined the role of the Nyishi community in building the state as the largest tribe of the state and lauded the role of the Nyishi Elite Society in social upliftment as an example to other tribes in the state deserving all out support from all communities of the state.
Chief Engineer, PWD, Central Zone ‘A’ and member of governing body council of Tanw Supu? Duku? (TSD) Hage Apa recalled the historic Nyishi-Apatani Summit 2015, solemnized on 20 September 2015 at Ziro and said that both the Apatani and Nyishi communities have come closer.
Earlier, Nyishi Elite Society vice president Tarh Tabin dwelt on mythological aspects of the celebration of Nyokum Yullo by the Nyishi community and gave a lucid picture of the history and origin of Nyokum Yullo vis-à-vis, the role of newly constituted organization in 2016 – the Nyishii Festival Council under the aegis of the Nyishi Elite Society as the apex body of the three federating Nyishii Festival Council i.e: Central Boori-Boot Yullo Committee, the Central Nyokum Committee and the Central Longte Committee.
Tabin who is also vice president of the Arunachal Indigenous Tribes’ Forum underscored its role for a peaceful and progressive Arunachal in the true spirit of pan-Arunachal for an inclusive growth. (DIPRO/ releases)