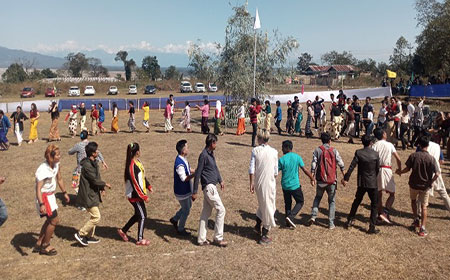 PASIGHAT, Mar 1: The Nyishi students studying in different institutes and government officials from Nyishi community in East Siang district celebrated the Nyokum Yullo with great enthusiasm and traditional fervor at the Polytechnic College ground here on Saturday.
Attending the celebration, Polytechnic College principal, C. Gogoi said that celebration of this festival has provided a platform to show-case the rich culture of the Nyishis. He asserted that such celebration at Pasighat has brought everyone closer.
He called upon one and all to take responsibility for preserving culture and identity. Gogoi asked the youths not to ‘forget their roots from, which they have inherited their traditions and culture, while embracing the modernity.’ He also appealed to the students to continue their feeling of oneness and advised them to be sincere and attentive in their studies.
Briefing on importance of language, Superintendent (Tax & Excise), Kingman Komut, in his brief speech, exhorted the youths to give time in learning own dialect, culture and traditions.
Organizing Chairman Atul Bagang appreciated the committee members for timely construction of “Yugang”. Bagang passionately appealed to one and all for preservation of the rich traditional systems for the posterity.
Organising Secretary Bamang Talar highlighted the mythology of the festival.
Display of Rikham-Pada dance, Buya dance, and friendly volleyball match were the part of the day long celebration. DIPRO