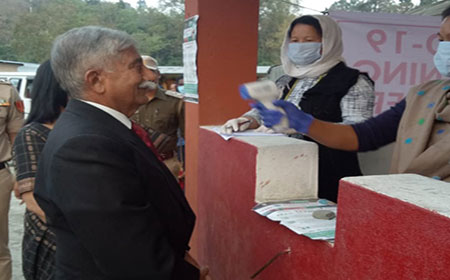 DOIMUKH, Mar 20: Governor BD Mishra and his wife Neelam Misra underwent thermal scanning at the Gumto check point near here in Papum Pare district upon their return to the capital from outside the state on Friday.
The governor’s escorts, drivers and staff also underwent thermal scanning.
Mishra commended the medical officers and staffs deployed at the entry points of the state for doing their duty well.
“Because of the dedication and sincere effort of these people, cooperation of police officials, and preparedness of the state civil administration, the state will fully succeed in combating Covid-19 and ensure wellness of our beloved citizens,” he said.
The governor appealed to the people to cooperate with the medical and police teams and undergo the requisite thermal scanning.
Meanwhile, the capital police have informed that “all VVIPs and senior officers fully cooperated with the police and medical team on Friday” in the matter of stopping for screening.
It had been reported on Thursday that several VIPs and senior government officers did not stop their vehicles for screening at the entry points of the capital complex.
“On Friday, DGP RP Upadhyaya and his wife also got screened at the helipad, and capital police officers, including Capital SP T Amo, also got screened while visiting the medical teams at the helipad,” the police said.
The police added, however, that “one vehicle at Hollongi check gate ran away without screening, and all police stations and check gates in the capital region have been alerted to locate the vehicle.”
A total of 53,272 persons have been screened so far at various entry gates in the state capital region, “and none has been found to be having unusual high body temperature,” the police said. (With input from Raj Bhavan)