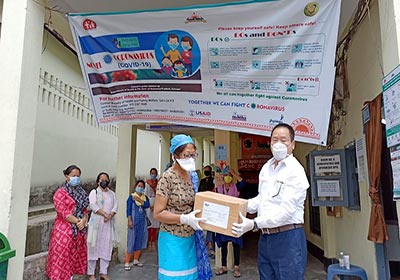 Staff Reporter
DOIMUKH, Apr 9: Local MLA Tana Hali on Thursday donated personal protection equipment (PPE) kits to the community health centre (CHC) here in Papum Pare district.
Earlier, following reports of shortage of PPE from the doctors and staff of the CHC, the Papum Pare district medical office had distributed 250 PPE to the CHC on Wednesday.
CHC MO, Dr Lobsang Chuki, informed that around 1000 PPE were donated by the MLA. She said the MLA informed that he has already placed an order for more PPE, which will also be donated to the CHC.
“We have also received donations of cloth facemasks from people, which we distribute to our patients and others,” she said.
The MO informed that the CHC has received a total of Rs 29,000 as donations from people, and that the amount is being used to procure medical aprons for the staff.
“I also received a call today from someone who told me that the alumni of Rajiv Gandhi University have also expressed their desire to extend help to the CHC,” Dr Chuki said.