[Staff Reporter]
ITANAGAR, Apr 20: Capital SP Tumme Amo clarified that the order to attend offices from 15 April has been withdrawn for those in non-essential departments, and requested people not to come out unnecessarily, or on the pretext of attending office, till further orders. 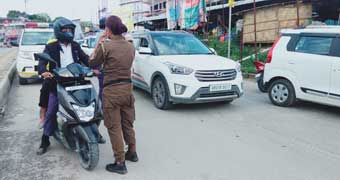 Inspecting the traffic congestion here on Monday, the SP said, “There is confusion among the citizens and government office staffs that offices have opened up. The order to attend office has been withdrawn. State bus services were provided for one day after the first phase of the lockdown, but soon after the central government announced an extension, only those who are engaged in essential duties have to continue attending work.”
On reports that there would be some relaxation after the 20th of this month, the SP said that, while the instructions keep changing with changing circumstances, the restrictions of the first lockdown still remain with regard to movement within the township.
“We are allowing people with medical emergencies to pass through, especially pregnancy cases and those of the elderly. We also have two vehicles, one each in Naharlagun and Itanagar, for medical emergencies or to drop off ration,” the SP said.
“The lockdown does not allow the gathering of more than five people even in medical emergencies. If you can, limit it to four people,” he said.
Amo said that while there is provision for people to go out to shop for essentials between 9 am and 3 pm, and for medical emergencies, it does not allow them to move freely in the streets without valid reasons.
“There is, however, some relaxation for shops operating in the colonies,” he said.
The SP also informed that about 30 to 40 vehicles are being seized daily for coming out unnecessarily.
“We only seize those vehicles whose occupants argue unnecessarily with the police or do not adhere to the request to go back home,” he said.