HAWAI, May 28: The newly constructed school building of the Government Higher Secondary School, Hawai has been notified as a facility quarantine centre (FQC) in Anjaw district with capacity of accommodating 100 people at a time. 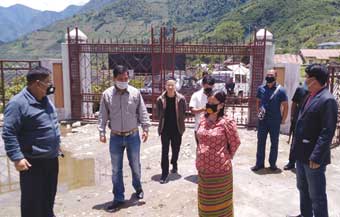 It is reportedly well equipped with all required facilities. Recently, two people under quarantine had been released after they tested negative for Covid-19.
Further, the building of the JNV, Hawai has been notified as a FQC with 10 beds capacity for isolation in the event of positive cases in the district headquarter.
As such, some people have been quarantined at Hayuliang FQC in place of Hawai.
At present, some people coming from outside the state for Anjaw have been quarantined at Namsai due to road blockade in the entire Anjaw district.
Earlier, MLA Dasanglu Pul inspected the FQC at Hawai.
She was accompanied by Deputy Commissioner Dagbom Riba, DHPD EE Dormen Gogoi, MO Dr Soumitra Bardhan and CO Rupir Siboh. (DIPRO)

Anjaw cut off
Anjaw district has been cut off from rest of the world since last one week due to incessant rainfall and road blockade.