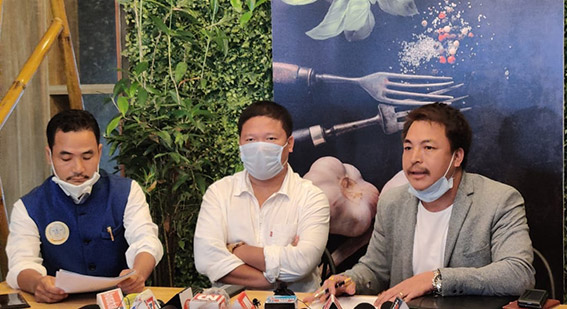 Staff Reporter
ITANAGAR, Jun 5: The All Arunachal Pradesh Students’ Union (AAPSU) on Friday called for a statewide lockdown, at least for two weeks, to contain the spike in Covid-19 positive cases.
In a press conference, AAPSU vice president Meje Taku said members of the union had called on Chief Minister Pema Khandu and his council of ministers to place their demand.
Taku said that many of the returnees to the state are being sent
for home quarantine after just a few days of institutional quarantine, due to congestion in the quarantine centres.
“Many home-quarantined persons are not following the SOP properly, which could put the entire population at risk. So, the government should impose a lockdown again, at least for two weeks,” he said.
Taku also suggested to the government to make repeat test mandatory for all the returnees, in order to prevent asymptomatic carriers from infecting others.
“The government should also start building health infrastructure it has announced to build to provide better healthcare facilities in all the districts,” Taku said.
The AAPSU also called for shutting down religious institutions and restaurants, terming the relaxation made for religious institutions and restaurants a “disastrous decision” amid the spike in Covid-19 cases in the state.
“If schools and colleges are closed, why is relaxation being given to religious institutions and restaurants to open?” Taku questioned.
The union further said that online classes, “as initiated by the health department,” would be feasible only for colleges, universities and schools in urban areas where connectivity is good. However, it said, online classes are not possible for schools in rural areas which have no modern communication facility.
“Making online classes mandatory would affect many students in the rural areas,” the union said.
It also demanded that the state government declare the highly infected areas in Changlang district as ‘red zones’, and urged the government to “maintain the refugees’ identities in the Covid-19 bulletins.”
“We do support that they (refugees) should be given equal health facilities like other fellow Arunachalees during this pandemic. However, in Covid positive data and bulletin the government should maintain clear-cut refugees’ identities,” said Taku.
AAPSU president Hawa Bagang appealed to the people to cooperate with the authorities in containing Covid-19. “Each and every person should be proactive to ensure that their wards sincerely follow the government SOP with regard to home quarantine,” he said.
The union also asked the government to install hand washing and sanitizer dispensing facilities.
The AAPSU meanwhile demanded justice for the victims of the firing incident at Pumao village in Longding district. It urged the government to ensure that the culprit responsible for the death of an innocent citizen is punished.