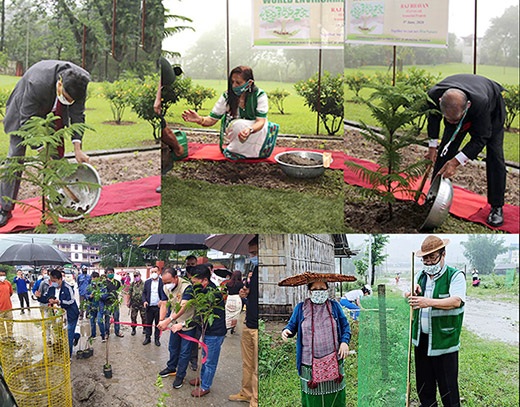 ITANAGAR, Jun 5: World Environment Day (WED) was celebrated throughout the state on 5 June with Governor BD Mishra and his wife Neelam Misra leading the way by participating in a plantation programme at the Raj Bhavan here.
Officers and staff of the Raj Bhavan and the governor secretariat also participated in the programme by planting saplings.
Speaking on the occasion, the governor called upon the people of the state to “benevolently pledge and commit to protect and sustain the pristine environment of Arunachal Pradesh.”
He exhorted the people, particularly the youths and students, to protect the flora and fauna, keep the rivers clean, and dispose of garbage in an appropriate manner.
“It is the duty of every citizen, with dedicated and farsighted plans and actions, to leave a better Earth for the future generations,” Mishra said.
In keeping with this year’s WED theme, ‘Biodiversity’, the governor’s wife unveiled the ‘Liberty’ signage of the Raj Bhavan’s butterfly garden.
The garden hosts a large number of host and vector plants for butterflies’ habitation and proliferation. Troides helene, Papilio paris, Hebomoi glaucippe, Pieris brassicae, and Zemero flegyas are some of the butterflies found in the Raj Bhavan garden.
The governor felicitated and rewarded Shivsankar Mahanto, Baburam Chetry and Anil Deori, “the most dedicated workers of the forests department, who are working at the Raj Bhavan.”

In East Kameng district, Sports & Youth Affairs Minister Mama Natung launched a ‘Town of Flowers’ programme in headquarters Seppa on the occasion of WED.
The programme is an initiative of the district administration to make Seppa clean, green and colourful. It was jointly launched by the administration and the DUDA.
Commending the initiative, Natung urged everyone to take part in such activities on a mission mode.
Along with the minister, MLAs Hayeng Mangfi and Goruk Pordung also planted saplings.
Among others, DC Gaurav Singh Rajawat, SP Piyush Fulzele, ADC Dahey Sangno, and members of the EKSWCO and other organizations of the district were present.
Earlier, all shops in and around the township were painted with different colours as part of the mission. Various NGOs also planted saplings across the town.
In Papum Pare district, the Galo Welfare Society organized a ‘plant adoption programme’ along the road to the Galo Heritage Centre in Tarajuli, near Naharlagun, to mark WED.
More than 200 saplings were planted during the programme, which was supported by the Naharlagun Mopin Management & Promotion Committee.
The programme was conceptualized by IMA-AP honorary secretary Dr Jego Ori, with the idea of each individual adopting a plant and nurturing it till it grows into a tree.
The organizing committee thanked Naharlagun Range Forest Officer Bomre Gamlin for providing the saplings along with 30 plant guards.
Officers and jawans of the 31 ITBP based in Yupia planted 500 saplings in the battalion’s campus as part of WED on Friday. The drive was inaugurated by Commandant LT Suanthang.
In East Siang district, the Pasighat territorial forest division along with the district unit of the Adi Students’ Union and the Tai Ahom Students’ Union conducted a plantation drive in and around the IGJ Higher Secondary School in Pasighat to mark WED.
Forest officials and students planted saplings along the national highway and roadsides.
DFO (Territory) Tasi Mize informed that plantation programmes will be carried out in various rural areas of the district during the weeklong celebration.
In Tirap district, the NERCORMP celebrated WED in New Bungting village by planting around 200 saplings of different species in and around the village.
The saplings, which included Hollock, Titachampa, Gulmohor, Neem, Arjun and Bokul, were provided by the DFO.
Khonsa West MLA Wanglam Sawin also joined the plantation programme.
In Anjaw district, the Krishi Vigyan Kendra (KVK) celebrated WED at its office premises in Khupa Camp.
KVK Head Dr Manish Kanwat highlighted the importance of conserving the environment and “motivating everyone towards a clean and green environment.”
Horticulture scientist Rebecca Eko spoke on the urban forest programmes launched by the union environment ministry. Animal science specialist Dr Santosh Kumar and agronomy scientist Khoisnam Naveen also spoke.
Saplings of Khasi mandarin grafted on rootstock Rangpur lime were planted in and around the office premises to promote the concept of ‘nagar vans’.
In Tawang, local MLA Tsering Tashi participated in a plantation drive organized jointly by the 38 Bn CRPF and NGO Human Rights First.
The Tawang Riders Club also joined the event by cycling to mark the day.
This year’s WED coincided with Buddha Purnima as per the local calendar; therefore, following the plantation programme, the members assembled at the SSB Budh Mandir and hoisted five-coloured Buddhist religious flags and prayed for the welfare of all sentient beings.
In Changlang, residents, government officials and members of the 9 Assam Rifles offered ‘shramdaan’ by leaving their hand imprints on the ‘Tree of Life’ wall mural, and participated in a plantation drive, besides disposing of garbage in a compost pit, to be used later in farming activities.
The shramdaan programme also involved beautifying and painting the children’s park in Officers Colony. Deputy Speaker Tesam Pongte, Changlang South MLA Phosum Kimhun, 9 AR CO, Col Surendra Kumar, and SP Mihin Gambo also participated in the programme.
DC Devansh Yadav spoke on the significance of observing WED. DFO D Lendo also spoke.
The day was also celebrated in Jairampur subdivision with a plantation programme. (With inputs from Raj Bhavan, DIPROs & correspondents)