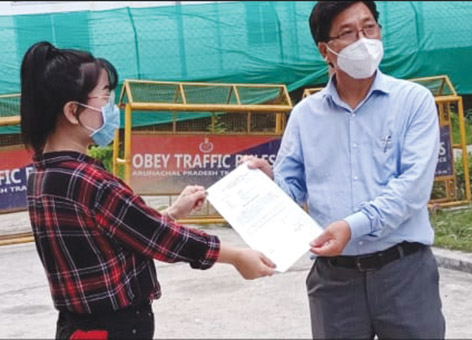 LEKHI, Jun 10: Two more Covid-19 positive persons were discharged from the Covid care centre (CCC) here on Wednesday after their tests came in negative, even as four more Covid-19 positive cases-one in East Siang and three in Changlang- all returnees were reported on the same day.
The two recovered persons were discharged in presence of Itanagar Capital Region Deputy Commissioner Komkar Dulom and DMO, Dr M Perme.
Talking to the press after being discharged, both expressed happiness and thanked the doctors, nurses and all the staff of the CCC for taking good care of them.
One of the persons to be discharged is a student who had returned from Delhi.
“I came from Delhi and was in paid quarantine. After I tested positive, I was brought to the Lekhi CCC. We were taken very good care of in the centre. The medical team treated us like family,” she said and thanked everyone at the CCC for taking good care of them.
She also had words of praise for the medical and police teams of PTC Banderdewa for their support, and urged people to listen to the advice of the doctors and maintain physical distance norms.
The other person discharged today is a working woman.
Sharing her experience, the woman praised the facilities provided at the state quarantine centre in Lekhi and urged the people not to believe everything they see on social media.
“I saw many videos on social media before coming back to the state. People were complaining about the facilities in quarantine centres and I was very worried. But my experience was very pleasant- both at the PTC and in Lekhi. In fact, staying at the CCC was almost like staying in my own home,” she said.
She further urged the people of the state “not to treat people staying in quarantine centres and Covid-19 positive persons as some kind of criminal.”
“The quarantine centres and CCC are strictly monitored by doctors and administrators. There is no chance of people going out of these centres and into public places. Instead of panicking, the people should extend support to them,” she said.
The DMO M Perme said that both the persons were discharged following standard operating procedure after two consecutive tests came negative.
“We are strictly following guidelines of the health ministry and people should not be fearful. All the people currently in CCC are in good health. We are monitoring them daily,” the DMO added.
DC Dulom also termed the discharge of the two people as a positive sign and briefed on the facilities at the CCC.
“We have 41 rooms at the CCC. Nine people were in it and with the release of two people, seven more remain,” he said.

278 rooms ready for use in state quarantine centre: DC

The DC informed that the state quarantine centre has 278 rooms for use, and work on the remaining rooms is underway.
“A total of 406 rooms were found usable, out of the over 500 at the BPL colony. But the condition of the 406 rooms was also not very good. We have furnished 278 so far and work on the remaining rooms has slowed down due to lack of labourers. However, we will get them completed soon,” the DC said.
He also said that all the Covid-19 positive people in the state and in the capital region have been detected from quarantine centres.
“The policy of the state government to put all returnees in quarantine centres and conduct tests has paid off. The people of the state should appreciate this. The state government has managed to control community level transmission through this decision,” he added.